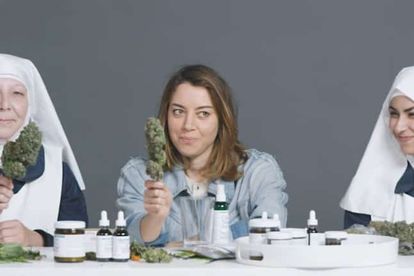 In the latest video from Cut’s Strange Buds series, actress Aubrey Plaza got high with the Sisters of the Valley – otherwise known as the “Weed Nuns” – who support themselves by growing their own pot in California.

Two of these Sisters of The Valley joined Plaza, who’s busy promoting her new, convent-set and quite raunchy comedy, ‘The Little Hours‘ for a weed-session to talk about cannabis, religion and sex.

If you’re not familiar with the “Weed Nuns”, they’ve actually been dominating the cannabis media since 2016 and have their own YouTube channel which features quite a lot of weed.

One of the “weed nuns”, Sister Kate explained that the group sells marijuana-based products in a self-sustained convent to “create honorable, spiritual jobs for women”.

She founded the convent in 2011 after learning of Michelle Obama’s efforts to improve the nutrition of school lunches. Sister Kate said: “Michelle Obama tried to talk to Congress about how unhealthy our children’s meals are. Congress declared pizza a vegetable because it made our children’s meals look healthier than they are. So I declared myself a nun. I said, ‘If pizza is a vegetable, I’m a nun’.

In the five minute clip they also share some of their “private medical stash” with the actress called “Purple Cream” that’s used to treat anxiety. The Sisters also believe cannabis was the other holy oil of the Bible and they maintain that “if Jesus lived, he probably smoked weed”.