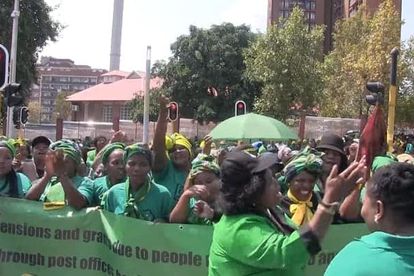 Always careful not to be caught on the right side of history – in recent years anyway – the ANNC Women’s League has come out strongly in support of disgraced social development minister Bathabile Dlamini.

Dlamini, who’s department is responsible for, among other things, paying out grants through the South African Social Services Agency (Sassa) has become something of a pariah of her own making after essentially failing to perform at the most basic level required of a minister in her position.

Yesterday Sassa – and by proxy Dlamini – had to answer to the Constitutional Court as to why it’s let the payment of social grants to more than 17 million impoverished South Africans up to fate, or at least why there’s no explanation as to how the grants will be paid come April 1.

Read: #SASSAConCourt and the roast of Bathabile Dlamini. Social media’s got jokes

While South Africans outside and the most learned judges in the country inside the ConCourt roasted Dlamini’s poor performance, the ANC Women’s League picketed in support of their leader. Yeah, Dlamini, who can barely keep her department together, is also the leader of the Women’s league.

Actually, if you think about it, it’s not surprising that the league would put itself in direct conflict with the South African constitution as well as the needs of the people… they’ve done it before.

Remember Kwezi? Remember when the ANCWL tried taking on a chapter nine institution – the Public protector’s office – and remember whenever Zuma’s legal mishaps make the news how the Women’s League rallies behind him – which would explain why Dlamini’s not been fired yet –?

Here’s a little recap of where the ANC Women’s League’s priorities really lie:

President Zuma is headed to parliament on Thursday for this year’s first Q&A session and Dlamini’s Blunders are bound to pop up… stay tuned.

Occupants saved by jaws-of-life in two collisions in Mpumalanga

Kaizer Chiefs vs Richards Bay: How to LIVE STREAM!

Mamelodi Sundowns vs Sekhukhune: How to LIVE STREAM!