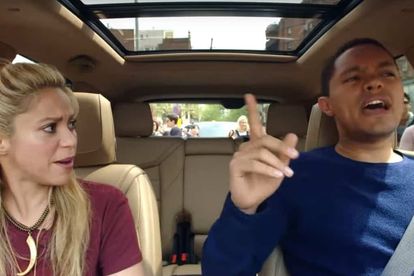 Our very own South African-born comedian, Trevor Noah and Colombian singer, Shakira are up next to feature on the ever-so-popular Carpool Karaoke: The Series.

Trevor, who’s been busy hosting The Daily Show in the US (for which he just won an Emmy award, just FIY) teamed up with Shakira for an epic sing-along in Barcelona, Spain.

Earlier today, Apple Music previewed the episode which will air on Tuesday on Apple Music.

In the preview, we can see the two of them take a tour in Barcelona singing Shakira’s hit, ‘Wherever, Whenever’, ‘Hips Don’t Lie’ and of course the official 2010 FIFA World Cup song, ‘Waka Waka (This Time for Africa)’.

The two of them also step out of the car to take some pictures with fans, and while Trevor says he is “huge in Spain”, Shakira seems steal all of ‘his’ limelight. Maybe Trevor should come and carpool in South Africa next time around!

I'm driving and Shakira is singing, a match made in heaven! ?? https://t.co/cBvtv2UOhH

Thanks to James Corden from The Late Late Show who turned Carpool Karaoke into global hit, fans will be able to watch their favorite superstars up close and personal for an entire show. You can catch the 12- to 25 minute Carpool Karaoke episodes each Tuesday to see your favorite artists sing their hearts out!

Earlier this month, Miley Cyrus and her family sang ‘Achy Breaky Heart’ with mullet wigs in a previous episode…be sure to check it out over here.

Women For Change backs Amber Heard: ‘We believe her!’