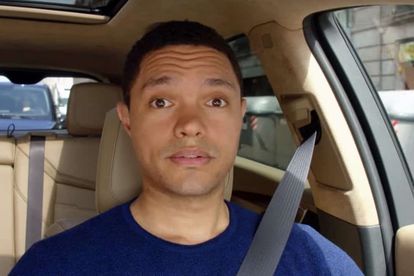 In Apple Music’s latest Carpool Karaoke: The Series episode, Trevor Noah and Shakira rock out in the beautiful city of Barcelona while singing along to some hits – and they are calling it their “most international” carpool karaoke episode yet!

Even though Apple Music subscribers have full and exclusive access to the episode made available as of Tuesday, The Late Late Show With James Corden shared a 2-minute clip of the duo singing and rapping on their YouTube page.

In the clip Shakira reveals something quite interesting about herself: “I became a pop singer, but I grew up listening to hard-core rock music,” she says before getting into The Cranberries’ hit-song’ Zombie’.

Meanwhile, our favorite South African comedian took to the driver’s seat and started rapping to  before saying that was one of the greatest moments of his life. “I will store it in my memories, rapping Wu-Tang with Shakira.”

“We don’t pay checks in Africa,” the Daily Show host continues to say. “You send money to Africa, we don’t send money out.”

Watch the duo singing their heart out over here:

In the preview the duo also steps out of the car to greet some fans. In the preview, we see the two of them singing Shakira’s hit, ‘Wherever, Whenever’, ‘Hips Don’t Lie’ and of course the official 2010 FIFA World Cup song, ‘Waka Waka (This Time for Africa)’.

Fans are loving “this match made in heaven”…Some on Twitter even asked Trevor how’d he got to be the world’s luckiest person. Not only did he sing with Shakira, but Trevor also extended his Daily Show deal to 2022, and walked away with an EMMY award.

He did jokingly thank the EFF for his success, though.

New episodes of Carpool Karaoke: The Series are out every Tuesday!