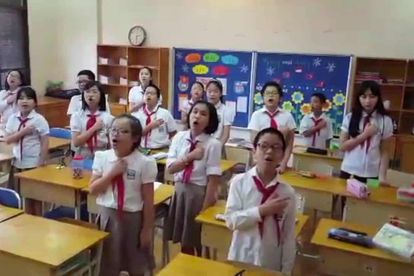 Rodwell Steinbridge Chigome from Cape Town is an English teacher in Vietnam and recorded his class singing the South African anthem recently.

He told SA People that there has been a steady influx of South Africans over the last five years and South African products are increasingly finding their way onto shelves in the country. Wine, juices and even biltong is being sold in Vietnamn

But, more importantly, Chigome says the youth of the country are playing an active role in fighting rhino poaching. Telling SA People: “Recently we had a Half Marathon in the city centre and the Embassy here organized a Rhino run. There’s massive awareness for anti-rhino poaching out here.”

Man United come from behind to beat Man City