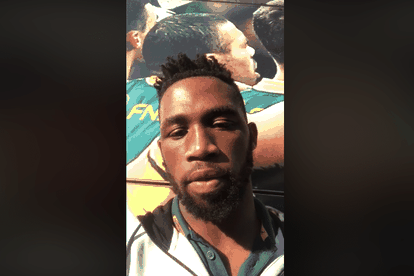 Whether he’s on or off the rugby field, Siya Kolisi can’t stop doing awesome things. However, it’s one of his young fans who deserves some kudos, here.

As reported by GoodThingsGuy, Ben is one of Kolisi’s biggest supporters. He follows the Springboks intently and has read the skipper’s biography, Road to Glory.

Kolisi himself had a tough upbringing. He lived in poverty, dwelling in the Eastern Cape township of Zwide. His book details how he was raised by grandparents and uncles, as his biological parents were simply too young to care for him.

How Siya Kolisi is inspiring his fans

Ben realised that this is a harsh reality faced by millions of South Africans across the country. The youth was inspired to start making his own blankets, so he could distribute them to people less fortunate than himself.

How rad is that? Moved by the darkest days of his hero’s life, Ben wanted to do something about it. In Mzansi, news travels fast…

Kolisi sent Ben a message of thanks on Thursday afternoon, which was subsequently shared to Facebook. Captain fantastic then made the charitable young lad an offer that he couldn’t refuse.

“I just want to say I’m honoured and I appreciate that my story inspired you. What you’re doing with the blankets is inspiring me. It means a lot, because I know how it feels for the people who don’t have this luxury.”

“I think I’ll join you. I’ll be donating blankets too, let me know how many you make and I’ll try and hand them on wherever I can. Hopefully, I get to meet you one day. I’ll keep in contact, let’s inspire and help as many people as we can. Cheers Ben!”

So there we have it. Ben and Siya will soon be teaming up to help society’s most vulnerable. This is what true leadership looks like, and we’re immensely proud to call both of these guys South Africans.

Liver sosaties: A braai day special treat everybody will enjoy

WATCH | Gwijo Squad welcomes Joseph Dweba: Who needs a haka when you’ve got THIS?

What is Enteric fever? Should you be worried?

Newspaper front pages from around the world, Friday, 12 August 2022

BIG FREEZE for Western Cape, as -5°C forecast for this weekend