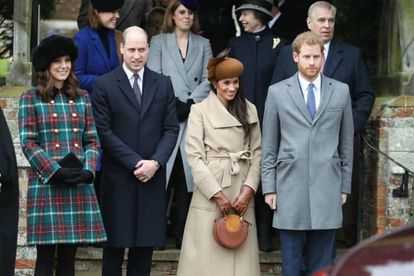 On Christmas Day, Meghan Markle joined the Royal family for the royal Christmas service in Sandringham.

Merry Christmas! The Duke and Duchess of Cambridge, Prince Harry and Ms. Meghan Markle have joined members of the Royal Family for the Morning Service on Christmas Day in Sandringham. pic.twitter.com/6DMRGFPntt

Queen Elizabeth and other members of the Royal Family along with newcomer Meghan Markle, Prince Harry’s bride-to-be, attended the Christmas service on Monday. The service marked the first time Meghan and other Royal family members were photographed together – and they couldn’t have looked more fabulous.

What’s more is Prince Harry, Prince William and The Duchess of Cambridge, Kate Middleton talked Meghan through her first public curtsy (as protocol dictates) when Queen Elizabeth left the service.

The Queen and members of The Royal Family have today attended the Christmas morning service at Sandringham Church. pic.twitter.com/M3PrjKxmYe

Of course Meghan nailed it, but as the video shows, she did look a little bit nervous at first.

It seems like the Royals all whispered a word of advice to Meghan before the big moment.

You can watch Meghan Markle’s first public curtsy down here:

Later, Queen Elizabeth paid tribute to London and Manchester after surviving terror attacks earlier this year. The Queen’s speech was televised on Christmas Day in the United Kingdom and the 51 other Commonwealth countries. She said the cities’ “powerful identities shone through over the past 12 months in the face of appalling attacks.”

She filmed the message in the 1844 Room at Buckingham Palace and also featured performances by the Commonwealth Youth Orchestra and Choir, conducted by Artistic Director Paul Carroll.

The Queen kept her message close to home and paid tribute to her husband Prince Philip. The Queen honoured the Duke of Edinburgh (96) with whom she just celebrated their 70th wedding anniversary — thanking him for the his “support and unique sense of humour.”

She said: “I don’t know that anyone had invented the term ‘platinum’ for a 70th wedding anniversary when I was born. You weren’t expected to be around that long. Even Prince Philip has decided it’s time to slow down a little –having, as he economically put it, ‘done his bit’. But I know his support and unique sense of humour will remain as strong as ever, as we enjoy spending time this Christmas with our family and look forward to welcoming new members into it next year.”

Watch the Queen’s Christmas Broadcast for 2017 down here:

PowerBall dividends: Check those tickets! We have a R33 million winner