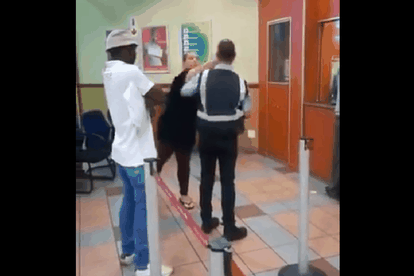 A video of an angry woman confronting her apparent partner has gone viral on social media after she turned up to the post office he works at to iron out a few home truths.

The footage – shared on the popular @crimeairnetwork account – shows the woman storming into the facility and marching right up to her man. Some brave soul, perhaps more dedicated to drama than their own safety, records the event from the back of the queue.

She informs the bloke that she knows “he’s fucking her around”, and that this is “the second time” he’s done so. Then come the slaps. She dishes one out with her right hand, then lands one with her left. The altercation finishes after the woman strikes her target with a quick 1-2.

It’s at this point that security officers intervene, coming between the feuding pair. The female is told to leave the premises, and after initially refusing, she finally walks away – one thing’s for sure, she made sure that her point had been made to the entire world.

Reaction to the video

It still hasn’t been confirmed which post office this occurred in, only that this happened somewhere in our wonderful land of Mzansi. Some Twitter users sided with the frustrated woman, whereas others think she went way too far by handing out some violent “abuse” to cheating-accused:

This is the thing. Women beat up their men in public because they know the men won’t react physically. They take advantage……wait till we get home. This is so wrong! Men ABUSE…..

All this would have been avoided by not cheating ?

Despite the very public altercation, no charges have been filed and the fella who was on the end of the slapping has faced no disciplinary action from his employers. Judging by the CCTV footage, the man looks like he knows the game is up. However, some will argue that no matter what he did, physical violence is never the answer.

WHAT WOULD UR RESPONSE BE… pic.twitter.com/JCaaeRFUjL