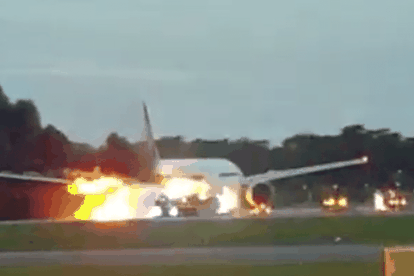 What would you do if your plane made an emergency landing and then its engine burst into flames? You’d break the EFF out, right? Well, apparently not the people on this plane. Can we talk about how remarkably chilled everyone sounds in this video?

Flames engulfed the wing of a Singapore Airlines plane after it made an emergency landing at the city’s main airport on Monday, with dramatic footage showing plumes of black smoke billowing from the aircraft.

The carrier said the Boeing 777-300ER en route for Milan turned back about two hours into the flight from Changi Airport following an engine oil warning message.

Airport staff managed to extinguish the fire and there were no injuries.