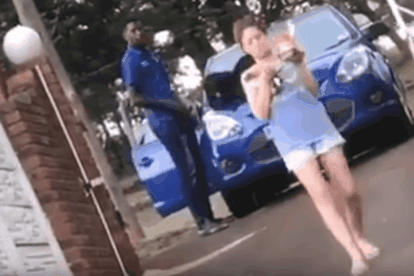 The employee and customer complete the transaction as normal before the recipient of the food walks away. As the gates close and her back is turned, the man exposes himself and begins a sexual act in broad daylight.

It was quite an extraordinary event to capture on camera. It’s not been confirmed why the person was filming in the first place, but it seems they were anticipating some sort of reaction from the driver.

Mr Delivery – who are responsible for dropping off takeaway meals via orders placed through an app – one of the most popular services in South Africa. Fearing further reputational damage, they acted very swiftly in dealing with their rogue employee.

On Tuesday, the company confirmed that they had fired the driver in question and apologised for the distress he had caused. They also condemned the behaviour, and vowed to prevent it from happening again.

“We strongly condemn the driver’s behaviour and sincerely apologise to the affected customer. After a full investigation, the driver has been identified and his contract terminated. We take this very seriously and do not tolerate this behaviour. O national driver management structures will ensure this incident is not repeated.”

The issue has opened up a debate about customer safety when using delivery apps. Outfits like Mr Delivery have to ensure they are employing a workforce made up of respectable characters, but if one slips through the net, it can lead to a harrowing encounter like this.

The driver from KZN wasn’t thinking about keeping his job or representing his company here – he was motivated by an opportunity that presented itself, and he took it.