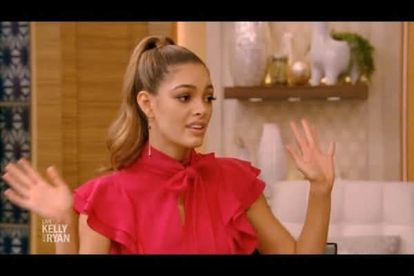 Demi-Leigh Nel-Peters has been enjoying the A-list treatment that comes with being crowned Miss Universe, after she won the tiara with a show-stopping performance on Sunday. But she’s also had to field questions about being a victim of carjacking.

She won the judges over with her natural beauty, her endearing intelligence, and concentrated activism to help empower women in South Africa. However, it would seem that our very own Miss Universe has another string to her bow.

Making an appearance on morning chat show “Live With Kelly and Ryan” – which draws in tens of millions of viewers across America – she discussed how winning the pageant had changed her life. But she was also asked about how she became the victim of a carjacking back in June.

Nel-Peters told viewers in The States that she was held at gunpoint by five men. She discussed the ordeal, and proved what an incredible person she is. Demi-Leigh revealed that she followed all he steps from a ‘safe driving’ course, which prepares its students for violent events like these.

How did she get away from her assailants? Well, she punched one of them in the throat. It doesn’t get any more freaking awesome than that:

“I was on my way to an event, stopped at gunpoint by five men stopped at a robot.

“Now, three months ago I went on a course that teaches you how to react in these situations. Unfortunately, carjackings are quite common in South Africa.”

“I told them to take everything and leave me alone. But one guy grabbed me and tried to push me back into the car. What I learned in that course, they teach you one defence mechanism – don’t try this at home – to punch someone in the throat. So I had to punch him and make a getaway.”

Infuriatingly, she was cut off by an ad-break during the broadcast, just as she was describing the key part of her ordeal. Thankfully, she was able to keep a cool head during the situation, and escaped a truly traumatic incident.

It’s official. Our very own Miss Universe is a certified badass!

WATCH: Anti-hijacker flamethrower: The rise and fall of SA’s Blaster

PowerBall dividends: One player takes home R344k and the jackpot rolls over to R16m

‘I was unemployed for four years’: Mbali’s mother on ‘Scandal!’ says