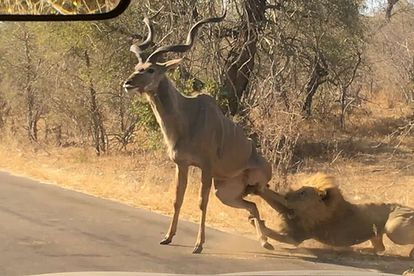 Spectators to the Kruger National Park were recently surprised when a male lion unexpectedly decided to take down a kudu in the middle of the road.

Latest Sightings shared the story on their official website saying they even received different angles of the sighting as various people were present when the lion swiftly took down the kudu.

One of those spectators was Nicole Tobias, a 34-year-old designer, and insurance administrator, who was able to capture the footage. She ultimately told the story from her and her family’s perspective:

“My husband, daughter and I were driving on the tar road from Skukuza to Lower Sabie on the 29 July 2019 after entering the park as early as we could, to see what we could find. Even though we had already had a beautiful rhino sighting, with elephants, various giraffe, and antelope, our little girl was dying to see a lion.

“We drove around the corner to a parade of cars crawling towards us on both sides of the roads and immediately knew something was up. In an instant, we’d spotted this beautiful male tracking towards us.

“We did not expect a hunt to take place at all! It was a lone male, it was broad daylight, the male lion didn’t appear to be hunting and the kudu didn’t appear to be nervous. We seriously just thought we were about to get an up-close lion sighting…”

Nicole said that the lion eventually managed to pull the powerful kudu to the ground and off of the road.

“It took the kudu a little while to stop struggling and kicking – the poor guy really fought hard.

“My little girl was quite bewildered by the sighting, so we actually drove off as soon as we were no longer parked in, but this took quite a while, so we were around for all the subduing the lion had to do, which included disemboweling the kudu to speed up the process (since the lion had caught the lion by the rump and not the throat). There was a lot of the guttural throat sounds that lions make while on a kill – ‘bone-chilling!’

Watch: Male lion brings down a kudu in the middle of the road [graphic video]

Payfast rebrand brings PayGate and SiD under one roof