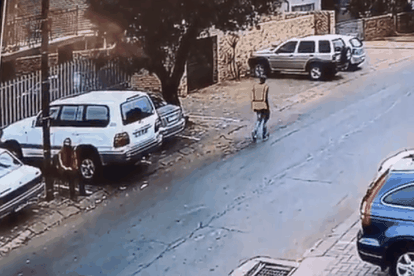 Even with a car guard on patrol, our vehicles are never 100% safe. A sleepy suburb in the heart of Lenasia, Johannesburg saw the peace shattered when a thief made off with a silver Toyota Corolla earlier this week.

The car – which is hidden behind a tree and a spiked fence – was taken from the south-west of Gauteng near Lenasia Exit 1, on Cuckoo Avenue. The security footage is currently being reviewed by authorities to determine who exactly was behind this brazen criminal act.

In the video, we see the car guard in a red top, going about his normal routine. A man in a yellow vest – who is certainly not an official guard – comes into shot, walking down the street. His interest is piqued by the noise of a running engine and an open gate.

Within 10 seconds, the robber in the hi-vis has entered the vehicle and begins his great escape. The car zooms out of the driveway in reverse and powers up the road. A local resident attempts to run after the getaway driver, but it’s ultimately a lost cause. The car guard looks on, baffled by the whole encounter.

As ever in situations like these, social media users have shared their two-cents worth. There’s a split in opinion over who’s at fault. Some have lambasted the guard and the car owner for their negligence, whereas others have defended the onlooker, saying that the incident happened too quickly to prevent.

Was the car gaurd sleeping on duty? Or he’s mind was not there at all. Again the gate was opened I take it the keys were on the ignition and the car was idling.

This thief was given a gift on a plate, here. The engine was left running with keys still in the ignition, and the gate to the property was still open. Opportunists are never too far away and any motorist who takes a chance like this has to understand how high the risk factor is.