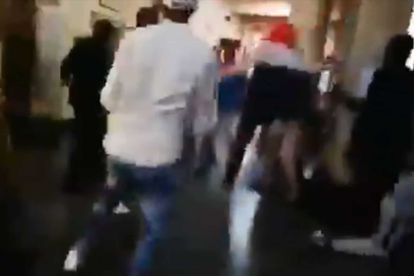 Blimey. You don’t see this every day, no matter what part of South Africa you’re from. The Johannesburg Magistrate’s Court was reduced to chaos on Wednesday morning when two rival Westbury gangs clashed inside the foyer.

A video uploaded by the Crime Air Network reveals the abject panic as a group of young adults come to blows. According to EWN, there were two court cases occurring inside the same building, featuring kingpins of the Varados and Fast Guns organisations respectively.

Leroy Brown is the Varados leader and he was there to face a charge of murder. His opposite number in Fast Guns, Keenan Ebrahim, was also in the dock for the same reason. Before either session was adjourned, suspected gang members turned out in force to support their bosses, and that caused anarchy in the chambers.

How the gang fight played out

It’s not yet been established how the brawl was sparked, but fists start flying and the kicks come steaming in. Horrified members of the public and court officials are forced to flee, before law enforcement spring into action.

One of the main trouble-causers ends up getting floored by the security team. In a darkly comic moment, one of the blokes who started the melee gets the fright of his life when a cop pulls a gun on him, dropping to the floor quicker than his big-man persona could desert him.

Brown will be back at the Johannesburg Magistrate’s Court for a bail hearing on Friday. Ebrahim’s case is expected to wrap-up before them, meaning the next fight these two guys could cause will be in a prison yard.