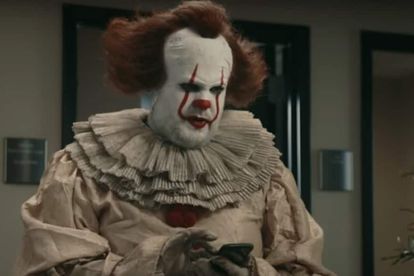 James Corden popular host from The Late Late Show, filmed a new sketch, this time dressing up as the scary clown, Pennywise from the movie, ‘IT’.

Following the release of the film ‘IT’, a scary movie based on Stephen Kings’ terrifying novel, James thought it a good idea to help out an office worker in need of the I.T. (Information Technology) department – something that can be confusing if you’re not familiar with the film.

In what he calls one of his favorite sketches, James dressed up as the evil clown after hearing about a call for ‘it’, when in fact an office worker called the I.T. department to solve a computer issue…and things don’t make much more sense from there.

All dressed up and no where to go, James starts to get “invested” in the office worker’s dilemma and stays in order to help, before another villain shows up.

In the end, absolutely nothing is resolved, though we do learn not to pop a murderous clown’s balloon…

Check it out for a good laugh!

The film, ‘IT’ has been one of this year’s most anticipated horror films to hit screens all over the world. The film centers around an evil monster who takes the form of a clown called Pennywise that emerges from a sewer every 27 years to prey on the town of Maine’s children.

One of my favourite sketches was on tonight. @ITMovieOfficial caused an I.T department mix up! https://t.co/42OELOWvY7

‘IT’ is showing in cinemas in South Africa at the moment.

Watch the trailer for the film ‘IT’ down here: