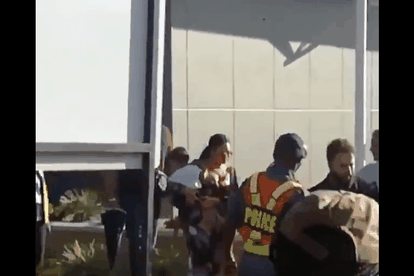 We’re really getting to stage of “fever pitch” right now. We are just a few days away from one of the most iconic music festivals in South Africa’s history, as the Global Citizen concert edges nearer. In fact, it already looks like Beyoncé is ready and raring to go.

The superstar touched down at Lanseria Airport on Thursday evening, where crowds had gathered to welcome her arrival. Superfans could not contain their excitement, and when their idol gave them a glancing wave, it was enough to spark cheers of delirium:

Beyoncé is free to share the twins with South Africa. Welcome home, my love.

Earlier in the day, we reported the first behind-the-scenes look of her upcoming show at the FNB Stadium. Footage has made its way online of her band practising ahead of Sunday’s big show. Bey herself wasn’t in attendance, but we’ve now had our first glimpse of what to expect.

What will Beyoncé perform at Global Citizen?

The video shows plenty of activity, with dancers and guitar players giving us a split-second of what we’ll be treated to. The background noise is dominated by a marching band, with trumpets and tubas hitting all the right notes.

In fact, we’ve got a pretty good idea of at least one song that’s going to be on her set list: In the last few seconds of the video, we can hear a few chords from Formation getting a run-out. The clip ends with a superb panorama of the FNB stadium, which is going to host the musical spectacular on Sunday.

It’s enough to get the Beehive buzzing, but details of her performance remain under wraps. The Global Citizen organisers teased that a “special guest” would show up unannounced during the festival, but hopes of a Destiny’s Child reunion have been all-but-extinguished .

On Wednesday, Beyoncé penned a beautiful open letter which thanked Madiba for his enduring inspiration. She paid tribute to his vision, and hailed him for helping to “turn dreams into reality”:

“It is an honour for me to travel to South Africa this week in celebration of you and your efforts to right so many wrongs. You were a strategic warrior, a bold activist, and charismatic and well-loved leader. Your vision for dignity, for human rights, for peace and a South Africa free of racism and apartheid, allows us all to turn dreams into reality.”

Watch the band for Beyoncé get warmed up here:

The ten most valuable sports teams in the world right now

Debt sustainability and recovery in Africa under threat