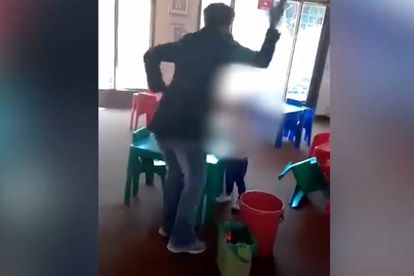 Graphic warning: This video from a crèche in Gauteng is not for sensitive viewers, as it depicts the physical abuse of a child by an adult. Viewer discretion is firmly advised:

South Africans have been left enraged and shocked by a disturbing video doing the rounds on social media this Thursday. A crèche employee has been filmed mercilessly hitting a very young child, and forcing her to clean up vomit after she was subject to abuse at the hands of the “carer”

The unnamed adult also spanks the child before delivering a salvo of blows to her head. The sickening clip for a very uncomfortable 90 seconds and has piqued the interest of regional authorities. Panyaza Lesufi is the MEC for Education in Gauteng, and he reacted with unfiltered apoplexy:

“Disgusting! I couldn’t even finish watching it! My team [including Steve Mabona and the Gauteng Education Department] will hunt this creche! I am standby to pounce just get details…”

Although we are yet to receive official confirmation from the education department, our sources suggest that the crèche is located somewhere in Carletonville, Gauteng. Another viral video has done the rounds of a young boy being attacked by a senior member of staff, although the Gauteng MEC did not confirm that the incidents were linked.

The Department of Social Development issued a statement earlier on Thursday, condemning the brutality wholeheartedly. They are seeking swift justice for the abuser, and implored members of the public who have any information on her or the nursery to get in touch with the GBV centre:

“We have seen the video of children being beaten by their caregiver at an early childhood development centre suspected to be in the area of Carletonville, Gauteng.”

“We want to condemn the abuse of children and wish to ask members of the public to identify the school and the caregiver who is seen forcing toddlers to clean their classroom while meting out the harshest punishment to the children. Anyone who has information please call the GBV Command centre on 0800 428 428.”

The Department of Social Development

Although there are plenty of videos doing the rounds on social media, the one you are about to see – initially posted by The Citizen – actually protects the child’s identity and blurs out her face. We want to help protect the victim’s dignity in all ways possible and ask you to think twice before sharing any uncensored clips.