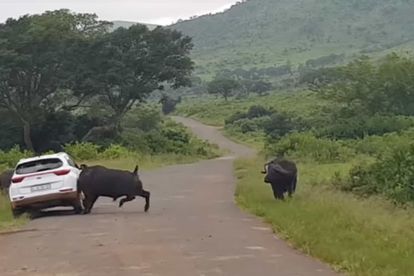 We’re not sure that this particular dent will buff(alo) right out. A bizarre incident unfolded at the Hluhluwe-Imfolozi Reserve recently, as a game drive went spectacularly wrong for a family in a hurry.

Captured by Vicky Schmidt – a tourist from Luxembourg visiting the KwaZulu-Natal park – the footage depicts a driver trying coax a herd of buffalo off the road. in a rush to get further down the track, the motorist no respect to the majestic mammals.

Man vs Buffalo, and there’s only one winner

The driver tries to sneak by them on the left-hand side of the road. The buffalo stands its ground, refusing to move. The stand-off reaches a stalemate until one of the other buffaloes comes charging in to help out a friend. He rams his head into the side of the Ford, lifting its back tyres off the floor.

The startled driver then manages to escape another severe blow and quickly speeds off down the road. The buffalo, meanwhile, runs from the scene, having made their point loud and clear.

Schmidt reveals that both she and the tour guides on their game drive felt the family in front were “trying to run the buffaloes” off the road and failed to observe them from a safe distance.

Speaking to YouTube channel GS Features, she alleges that they only had eyes for an elephant further in the distance and when they couldn’t get ahead, tempers flared on both sides of the animal kingdom:

But the family in the car tried to run the Buffaloes off the road, so they could pass with their car. As you can see on the video, they weren’t interested in the buffaloes but were taking pictures of an elephant which was a long way off. They didn’t respect the buffaloes and this is what I told my boyfriend during taking the video”.

The take-home lesson from all of this is, well, to behave yourself better on a game drive. You are in the backyard of “The Big Five“, and that’s a title you have to respect. No-one should try and dictate the rules of the road when it belongs to the buffaloes. Otherwise, they’ll do a number on your paintwork.