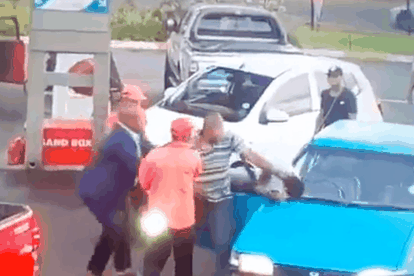 You don’t have to be on the road to experience road rage. A video posted to social media on Thursday night – and shared by crime expert Yusuf Abramjee – shows the disturbing moment a motorist pummels another driver after the cars collide at a Caltex garage.

The first red flag for this video is how the aggressor has parked his Hyundai i10. At a bizarre angle, 45-degrees from the pumps, his rear end seems to be obstructing a large part of the forecourt. It’s the first ingredient in this recipe for disaster.

As garage staff approach the car, another vehicle pulls in. Failing to anticipate the angle of the Hyundai, he ends up clipping the back-end, sending shards of glass from the headlights flying. The driver of the blue car does the right thing and stops to acknowledge his error of judgement. But he’ll be wishing he never bothered, now.

The hulking owner of the Hyundai lets at the man who damaged his car, pinning him against the door and delivering a series of fierce blows to his victim. Haymakers, uppercuts and jabs are all mercilessly administered as the unsuspecting citizen suffers through a brutal round of punishment.

Staff and onlookers at the Caltex make a very lukewarm attempt to pull the pair apart. Given the ferocity of the punches, it’s understandable why they were scared to interfere. The group of men eventually persuade him to stop the beating, before both parties return to their vehicles and assess the damage.

This isn’t exactly a great advert for doing the right thing, is it? The motorist could have chosen to speed off rather than hanging back to apologise. But it seems no good deed goes unpunished in this country. Debate has raged on social media about which driver was at fault for the crash, but both have to take responsibility for this cock-up.

We are still trying to establish where this all unfolded, and what the police plan to do about it. As soon as we’ve verified this information, the article will be updated accordingly.

HOW NOT TO EXPRESS UR ANGER… pic.twitter.com/eXMopJUhA3