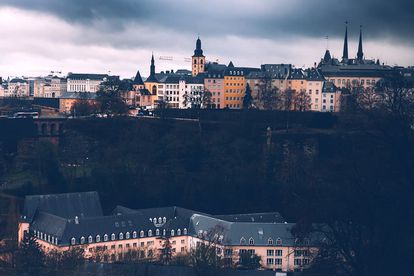 This tiny landlocked European country can be found sandwiched between France, Germany and Belgium.

It takes one to two hours to drive from the north to the south of the country, making it more like a big town than a country so to speak.

Its entire population is approximately 525,000 people of which 43% are foreign residents. Making Luxembourg, when compared other countries in Europe, the one with the highest number of expats. For this reason, it is a melting pot of many other cultures.

In the same fashion, 70% of the country’s workforce is foreign expats, many of which communte daily from the surrounding countries.

There are three official languages: German, French, and Luxembourgish. The world Luxembourgish gets me chuckling each time. How absolutely adorable does it sound?

German and French are primarily used for administrative purposes and written communication while Luxembourgish is used in everyday conversations. In school, everybody has to learn German beginning in first grade, French at the end of second grade and English in 8th grade.

Interestingly, most residents here speak an average of four to seven different languages with Portuguese being another main one.

They call it Grand Duchy for a reason

Luxembourg is the only remaining Grand Duchy in the world with a monarch dating back to Holy Roman Times. In other words, it is the only country that has a Grand Duke as a head of the state.

This monarchy is a key element for the Luxembourgish state and nation. For Luxembourgers, it serves as a guarantee for stability and makes it an attractive country for foreign investors. To name a few – Skype, Amazon , the RTL Group (Europe’s largest entertainment network), Paypal and Google have headquarters here.

Don’t let Luxembourg’s tiny size put you off. It is filled to the brim with fascinating things to see and so much to do. From the historical capital of Luxembourg City, a UNESCO World Heritage site, to the Roman ruins found in Echternach. To the many castles and beautiful landscapes found along the Mullerthal Trail, Luxembourg has quite a bit to offer.

Luxembourg is one of Europe’s greatest fortified sites and it is for this reason that UNESCO has designated the entire city as a World Heritage Site.

Originally the city comprised of a small fort that was built on an almost inaccessible rock in the 10th century.

The impressive walls we see today have been built into and around a very steep rocky outcrop of a natural fortification.

Even more fascinating is that it has moved from one great European power to another and has been constantly strengthened and reinforced. The Holy Roman Emperors, the House of Burgundy, the Habsburgs, the French and Spanish kings, and finally the Prussians.

Today, evidence of all of these eras remains through the number of gates, forts, bastions, redoubts and casemates.

What’s more, the streets of the old quarter still represent the original layout and house many of the original public buildings that still bear the imprint of their former inhabitants. The church of St. Michel, now converted to a veritable museum of sacred art is one such building.

The city has no shortage of things to see. Arguably the most notable one is the Bock Casemates, also part of the world heritage sights in the city.

These atmospheric 21km long honeycomb rock galleries and passages are found beneath the Montée de Clausen, the clifftop site of Count Sigefroi’s once-mighty fort. They were initially carved out in 1644 during the Spanish domination era.

The tunnels are 23km long and on some floors, you will find defensive passages that reach down as far as 40 metres. It is because of these that this fort has been given the name of the “Gibraltar of the North”. It is the most powerful emplacement in the world.

Not only has the casemates housed everything from garrisons, bakeries and slaughterhouses, but during WWI and WWII it was used to shelter 35,000 locals.

This virtual tour gives you an in-depth look inside the casemates.

One of Luxembourg’s biggest and most picturesque towns is Vianden in the North of Luxembourg and close to Germany’s border. This delightful historic town dates back to the Gallo-Roman age and was once covered in vineyards.

By the same token, Vianden possesses one of the oldest charters in Europe which further adds to its charm. History is written all over its cobble stoned narrow winding lanes, time-worn buildings and candy coloured houses.

A fairytale castle dominates the cliff that flanks the glistering river below. Enjoy panoramic views of the “Our Valley” from Luxembourg’s only chair lift that takes you to a height of 440m.

The Hunchback of Notre-Dame

Does The Hunchback of Notre-Dame ring a bell?

Well, Victor Hugo, the most well-known French poet, novelist and dramatist of the Romantic movement takes credit for this famed novel. He was inspired by Vianden’s delightful scenery so much so that The Victor Hugo Hotel’s name is in rememberance of him. He found refuge on the first floor of the inn next door, which is now a museum.

You can view some of the remains of his manuscripts, letters, furniture and a few other personal documents.

Similary, a statue commemorating him was donated by the French Senate and stands on the breastwork of the bridge.

The Viaden Castle that rests atop the cliff demands your attention. And for good reason. It is one of the largest and most beautiful feudal residences in Europe from the Romanesque and Gothic eras. It is majestic and without apology draws you in.

As a matter of fact, it receives more than 200 000 visitors each year.

This feudal manor was constructed in the 11th century on the foundations of a Roman Castellum and a Carolingian refuge.

Equally important, it was the seat of the influential counts of Vianden and boasts close connections with the Royal family and the German Imperial court.

Inside, you will find the 12th century palaces and only chapel still in tact.

Echternach was my absolute highlight. Not only is it Luxembourg’s oldest city, but it is also one of Europe’s earliest centres of culture and Christianisation.

It has been awarded the EDEN (European Destination of Excellence) award for its sustainable tourism.

It literally is a skipping procession whereby participants skip two steps to the left and then two to the right.

Obscure pagan traditions and myths lie in its origins. In ancient times this event drew thousands of pilgrims who came on foot to receive its healing powers. It was believed that the procession, healed not only epilepsy but also other aches and pains afflicting both men and animals.

The old town of Echternach has medieval roots. Its city wall dates back to the 10th century, and if you are up to trying something different – spend a night in one of the two medieval towers that can be booked through the local tourist office.

Its labyrinthine streets house many monumental works that have retained its medieval charm. The ancient Peter and Paul Parish Church were built on a Roman castellum and have Merovingian, Gothic and Romanesque elements.

At the foot of the church, a stone with the Celtic interlace is reminiscent of 1300 years history of Echternach.

The 11th-century Roman Basilica is of particular interest. It was rebuilt after World War II and houses the 8th-century crypt of the only saint ever buried in Luxembourg.

Love Architecture? Then you will love the Gothic and Renaissance facade of the former courthouse “Denzelt”.

Many of the buildings have been rebuilt, as a result of World War and many destructive fires that have passed through the town.

Let me explain. The Romanesque Basilica was originally built in 700, but was destroyed by a big fire in 1031. Then was destroyed again during WW II later having to be rebuilt for the third time during the 1950s.

Life of the Romans

Around the lake, you will find the remains of the largest Roman Villa. These will take you back in time and give you insight into the early lives of the Romans.

Model reconstructions and 3D displays show the hypocausts, sauna, pool facilities and a reception hall of this complex.

The Echternach lake is an absolute gem and the area surrounding it is an adventure playground waiting for you to explore it.

Love biking, especially on MTB trails? Whatever your ambitions are, these are the trails for you.

Take advantage of The Youth Hostels’ offer to rent bicycles for either a day or a full week. There is even a bike park where you can show off your skills.

Prefer peddling? You can explore the 30-hectare lake from either a peddle boat or a paddle boat that can be hired from Degrenge Schapp at the entrance of the lake.

If you always wanted to learn how to do rock climbing you can now. The Youth Hostel offers courses at its pretty sweet 14-meter high climbing gym. You can either participate in regular climbing courses or learn the skills and safety techniques to do free climbing.

Once you have learned all your new skills, try climbing your way through the boulders of The Mullerthal trail that can be accessed by a short 15-minute walk. The individual challenges posed are a beautiful way to build your self-confidence and self-assurance.

Luxembourg has some incredible hiking trails that span some 5000km crossboarder.

Echternach finds itself in the heart of all this, in the Mullerthal Region, more commonly referred to as Luxembourg’s Little Switzerland. It’s a great place to appreciate nature’s historical offerings.

The trails here offer some of the most spectacular scenery. It is for this reason this trail ranks high up there on my list of favourite hikes.

For example, the section from Echternach to Berdorf will leave you in awe.

The 6,5km trail takes you through some seriously picturesque nature. The wolves canyon, known as the “Gorge des loups” is the absolute highlight.

Here you will find gigantic boulders that bare evidence of where the seabed used to be. Millions of years ago Luxembourg was completely covered by the sea. Fascinating right?

A local friend of mine likes to call walking through these boulders “elfing”. You are so small by comparison. Spot the tiny green bench in this image. This will help you gain perspective of their powerful size.

I must add though that no photo can justify its magnificence. It’s one of those experiences you just have to have in person.

Luxembourgers love a good celebration. Plan your trip for the summer when events like the International Festival – a festival that boasts thirty major international productions in areas like opera, dance, theatre, orchestral music, jazz and world music.

You can also look forward to other Folklore festivals and jazz concerts. Have a look at “Visit Luxembourg’s” event calendar for some more inspiration.

Love the images you see? They are all for sale as art pieces on the 51 Countries and Counting Travel platform. Click herefor more information.