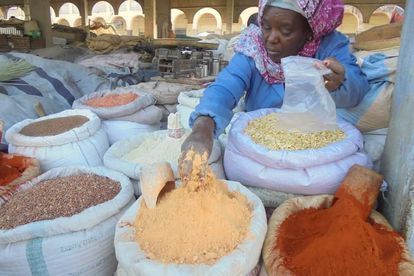 As I settled down for dinner in the 1930s Italian-built hotel in Asmara, the capital of Eritrea, I asked for a glass of wine. Local wine. Oh no, they protested, we only stock box-wine. Box-wine from where I asked. South Africa, they replied, rushing in with two boxes of Stellenbosch vintage. They poured me a glass, full to the top, about twice as much as a bar or hotel anywhere else in the world.

“Good taste,” they muttered. It might have come a long way, God knows how, as there’s no communication between Eritrea and South Africa. Unless it comes with the mineworkers from Southern Africa who sail up the east coast to Eritrea to work.

Not too many people go to Eritrea to visit. Bordered by Sudan, Ethiopia and Djibouti, Eritrea occupies a strategic area in the Horn of Africa with more than 1000 km of coast on the Red Sea. It’s remote. However, it has links with South Africa. In the harbour of Massawa, ships are taking minerals to South Africa for processing. These minerals have been mined out of the mountains by Zambians, Zimbabweans and, apparently, South Africans I was told. But perhaps the most interesting link is that the wine I was served was South African box wine. No Italian Chianti or local plonk, just good old ‘box-wyn’.

When asked, I said was going there to see the architecture. Many of the buildings are centrepieces for the Italian modernist movement in the 1930s when Mussolini’s ambition was to establish a new Roman empire in Africa. To do this he sent his best architects to build a model city full of Art Deco and Futurist design and called it Piccola Roma.

The visa people looked non-plussed but eventually gave me the visa for £50, cash. I took a lot of planes to get there and was to have a really rewarding and happy time in Asmara, one of the most striking and unusual towns in the world, and one of the least known.

Eritrea (pop 5mil+) is a difficult country to write about. There’s so much good about it but also so much bad. Its history is tangled and its one-party state is secretive. It had a 30-year war with Ethiopia before it won its independence in 1993.  It is the sixth newest country in the world and the capital, Asmara, was recently named by Unesco as a world heritage site because of its extraordinary modernist architecture.

It is reportedly one of the worst countries in Africa for press freedom (only North Korea ranks lower) and human rights. It’s second only to Niger for poverty and the GDP was estimated at $740 recently. Eritreans are the biggest group of asylum seekers in Africa, about 6% of the population A UN report found that up to 400 000 people were ‘enslaved’ in the Eritrean military. In 2016 the UN called for the government to be brought before the international criminal court for continued crimes against humanity.

The president, Isaias Afewerki, was elected in 1993 and is still there 25 years later with no opposition party. Amnesty International believes that the government of Afewerki has imprisoned at least 10,000 political prisoners and claims that torture — for punishment, interrogation and coercion — is widespread. I was told that there were seven or eight prisons in or around Asmara but nobody could volunteer any information. Free speech is a luxury the locals do not have.

Asmara, the elegantly faded capital, (pop 800,800), came under Italian control in the 1880s when they conquered the territory of Italian Eritrea. The Italian background there has visibly endured – the railway station 16km in the mountains is still called Seidici (16 in Italian), the churches, the road through the mountains to the coast is Italian-built, the menus include pasta and pizza and some people I talked to still spoke Italian.

In Bar Zilli on Beirut St with its Art Deco radio-style curved façade, I spoke to young local men in both English and Italian as we sipped macchiato and drank local Melotti beer. I thanked goodness for CNN aiding their English as the Eritrean language, Tigrinya, is unnavigable and I don’t speak Arabic.

Education is free in Eritrea as is health. Every village has a clinic now and the education seems good with many going on to university studying useful subjects like accounting. Some of the boys I met working in the Metal Market, worked in the mornings and studied in the afternoons. They spoke English and wanted to give me one of their coffee burners, made, literally, from old bits of prams and cans. They all wanted to go to America.

I was struck by the friendliness of the locals, mostly long-legged and slim-build men. (Women keep a lower profile.) They say it’s their excellent home-grown, healthy diet – and the cycling. Eritreans are Africa’s champs. But their footballers, nicknamed the Red Sea Boys, haven’t yet qualified for FIFA finals or Africa Cup of Nations.

They’d all heard of Russian writer Alexander Pushkin, whose mother was the granddaughter of Ibrahim Gannibal who was allegedly taken as a slave from (then) Abyssinia and presented to Tsar Peter in Russia. There’s a fine statue of Pushkin, with his dark curly hair, in Memorial Park. Both Russian and Eritrea dignitaries opened it with aplomb, forging close cultural ties.

Close business ties have clearly been forged between Eritrea and China, currently building an Expo business park, near an Italian and a German development.

Driving out of town, ageing concrete Mussolini-built suspension bridges have been replaced by new ones donated by South Korea for the trucks and (Libyan) oil tankers that traverse them night and day. The minerals mined from the mountains, by workers including Zambians, Zimbabweans and South Africans, are managed by Canadian and Australian companies. Some of the handfuls of boats being loaded with the minerals at the port, Massawa, are destined for South Africa to be treated, I was told.

Eritrea is developing with growing international help but poverty and food insecurity is widespread. Their white marble might sell well to Italy and modern colonists like China might feature prominently – – the government gave them land to build their embassy – – but it needs so much more input into the key natural resources that include natural gas, gold, copper, oil, zinc and potash.

Almost 70% of the country is covered by the greenstone belt of Eritrea that has deposits of precious metals and volcanic massive sulfide (VMS).

Eritrea is courting tourism although you need a Travel Permit for Foreigners from The Tourism Service Center (next to the Sweet Asmara Cafe in Harnet Avenue) if you want to go outside Asmara. (You’ll need to show them at checkpoints.)

Asmara is an easily manageable small city for visitors. There are interesting markets to visit, mosques, churches (religion is roughly 50/50 Christian and Islamic), mellow coffee shops, the outdoor Tank Graveyard of rusting war tanks, aircraft and vehicles from various Ethiopian/Eritrean wars, piled up in a field where sheep and goats graze.

There’s an elaborate theatre and opera house built in 1918, the extraordinary 1938 stadium Bahti-Meskerem where the president addresses his people for hours, and music shows and football fill in. And other architectural gems, including eight cinemas, preserved in the sun but now on a permanent interval.

I had a guide referred to me by my London greengrocer, who is from Asmara, to take me around, and felt that I was very welcome.  Everybody smiled at me and was keen to talk.

As he drove me to the airport to fly home on the ridiculously early 4am flight to Dubai, the airport road was packed with people walking back to town at 2am. They’d all gone to watch the Arsenal/Chelsea game LIVE on the airport café’s television. Seems that certain things are the same worldwide.

Girl, 17, stabbed detective with broken bottle after he raped her in police station