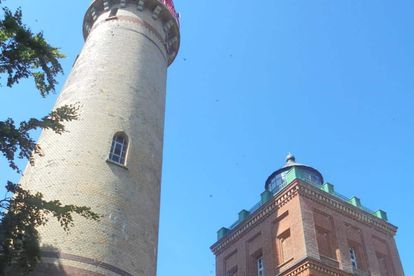 As I walked around Prora, the holiday resort Hitler built for 20,000 Nazis on Rügen Island, I wondered if any members of the South African pro-Nazi Ossewabrandwag (Ox-wagon sentinel) or OB had dreamt of going there for a holiday on the exquisite white sand beach on the Baltic Sea.

The complex at Prora was destined to be a vast hotel of six-storey blocks stretching along the beach for almost five kilometres just south of the pretty seaside town of Binz. Each block was to have its own facilities. Hitler’s plans included a theatre, cinema, cafes, restaurants, piers outside big enough for cruise ships, swimming pools with wave machines, a festival hall for 20 000 and solarium halls. It was a true Strength Through Joy (Kraft durch Freude) project. And a paid-for 10-day supervised holiday there would have been extremely pleasant for the Nazi faithful.

But it was never to be. When the Second World War broke out in 1939, construction was put on hold and instead, unfinished, it became a shelter for people left homeless by bombing raids, a military base for the invading Soviets, a later base for some of the East German army, a convalescent home, a centre for Balkan asylum seekers and a youth hostel.

Now, however, it has got the seal of approval for renovation and for sale as flats. Already there’s a hotel, a museum and people are buying space for 3 to 7,000 euros per square metre. Of course, the OB doesn’t exist anymore and the price is high in Rands but the beach is still lovely and Rügen is an unusual place to go.

It used to be in East Germany and is still an almost exclusively German seaside resort.

Other things to do, apart from Prora, include going onboard a British submarine in Sassnitz, captured during the war, a great black hull with HMS Otus written on it and a Union Jack fluttering overhead. They warned me that the circular entrances between sections were small and they were so right. I ended up with bruises up and down both legs. And very pleased that I would never have to be a submariner, with those tiny short bunks and only two loos for the entire crew.

Another excellent thing to do on Rügen is to climb the nearly 200 steps up the lighthouse at Cape Arkona and view the Baltic Sea at the end of the rolling yellow wheat fields. And then take the nearby ferry to Hiddensee. It’s a 20 minute crossing (about £1 per person) to the island which 16km long, pencil-slim and very rural. It is full of fairytale thatched cottages with steep roofs for the winter snow and colourful gardens. It’s peaceful and pretty. You see people transported by horse but mostly the traffic is bikes.

Of course, in Rügen, you could just eat fish, drink some unusual (Stortebeker) beer and sunbathe nude on countless beaches. But it would be a shame to miss the magnificent Putbus, a town of entirely grand white buildings unlike any others, or stop for fish soup on the harbour, or the 18th century Granitz hunting lodge or the village markets.

This island, with its big open skies, has attracted artists like Caspar David Friedrich, composer Brahms, Hans Fallada author of Alone in Berlin, playwright Bertolt Brecht and many others. Being part of Germany, most people speak some English, the roads are excellent (except when they suddenly slip into East German cobbles) and there are cycle paths everywhere.

Footnote : It would be a pity not to go to nearby Peenemünda on neighbouring island of Usedom to see where Wernher von Braun in 1936 designed the first functional liquid-propellent rocket, the V-2. It was called a vengeance weapon. During The Blitz in London, it would screamed overhead and then go totally silent while you waited to see if it was going to destroy your home. There’s a V-2 standing on the lawn in front of the technical laboratory where the rockets were built, now a museum.

How to get to Rügen

Fly to Hamburg or Bremen and hire a car.