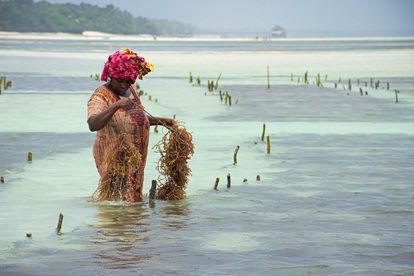 Zanzibar is a fest for the eyes. Image via Pixabay

Zanzibar is a fest for the eyes. Image via Pixabay

Located in the Indian Ocean, 25 kilometres off the coast of Tanzania and made up of two large islands surrounded by myriad tiny ones, the Zanzibar Archipelago is undoubtedly one of the jewels in East Africa’s crown.

Vying with the Serengeti is Tanzania’s most precious natural asset, Zanzibar, also known as Unguja, which will mesmerise even the most jaded traveler.

Zanzibar’s rich history and alluring mix of cultures add to the flavour of the island from the ancient Persian caliphs that dot the island and the vibrant bustling markets to the heavily laden scents of India that float in the air.

Uniquely East African flavours assault the senses — from the network of alleyways that wind past Arabic-style houses with brass-studded wooden doors and the tall, traditionally garbed Maasai striding across the beaches to the colourful back-street markets of Zanzibar City’s old quarter filled with Swahili and Indian traders in long salwar kameezes and embroidered skullcaps.

Add to this uniquely East African flavours of Swahili and Arabic and you have an exotic melting pot of distinct and undeniably “Zanzibarian” charm that can only be found in this magical East African archipelago.

Home to some of the world’s most magnificent beaches, gin-clear waters teem with myriad marine life, colourful, pristine reefs offer excellent snorkelling and diving, and a network of small, nearly deserted islands promise secluded retreats to hide away from the world.

The eastern shores of the island are home to the most beautiful beaches. Protected from the open ocean by a long barrier reef, coral white sand and calm, gently lapping waters are the order of the day.

Turquoise blue waters cover a myriad of marine life; shallow, ivory sandbars are perfect for wading in the warm waters; and a network of small, nearly-deserted islands offer secluded retreats.

A lack of tidal movement makes Ras Nungwi on the northern tip of Zanzibar a perfect place if you are looking to swim around the clock without having to walk far out to sea to chase the ocean. A little further away is Kendwa with a laid-back and relaxed atmosphere – perfect for soaking up the sun.

For a busier vibe, head to Paje, which is great for swimming and interacting with other travellers, as well as being one of the best places on the island to enjoy water sports such as scuba diving, windsurfing, or kite surfing.

Part of Tanzania’s Mafia Archipelago, Mafia Island is a lush green wedge of land bordered by white sandy beaches with swaying palms and surrounded by the azure waters of the Indian Ocean, much of which is protected by the Mafia Island Marine Park.

The southernmost of three islands, including Pemba and Zanzibar, Mafia Island has a small population of mainly fishermen and farmers who grow coconut, cassava, paw-paw, and rice, and who are friendly and laid-back.

The protected waters around the island teem with brightly coloured corals, and a wealth of wildlife such as whale sharks, turtles, and rays so snorkelling and scuba diving are must-dos. Footprint beaches are banked by coconut-laden palms, and the thatch roofs of luxury lodges peak out from the trees.

Lined with thick mangrove swamps and tranquil lagoons, the island’s coastline is perfect for exploring by boat, while the idyllic, powder-white sandy beaches call for sunbathing and relaxing.

The island is surrounded by healthy coral reefs that are inhabited by millions of vibrant tropical fish, and other marine creatures, which makes for excellent snorkelling and scuba diving.

The island’s fertile and lushly vegetated hills are covered in clove and mango farms and the coastlines are dotted with tiny fishing villages steeped in tradition.

White-sailed fishing dhows set sail on high tides, farmers load mangoes and cloves onto outbound boats, and women farm seaweed in the white coral sands. The steep coral walls of the Pemba Channel are home to an abundance of fish and boast some of the best diving in East Africa.

Capturing the vibrant essence of the “Spice Island” in an exotic blend of laid-back beach life and ancient culture, Zanzibar offers a range of beautiful places to stay from intimate seaside escapes to elegant spa resorts that reflect the island’s beauty and character.

Renowned as one of the world’s most romantic honeymoon destinations with pristine, white sandy beaches, azure blue waters, and breath-taking sunsets, there is no lack of luxury beachfront cottages and exclusive boutique hotels, tucked away in secluded coves, for couples wanting an intimate escape.

The island also offers a range of family-friendly hotels with safe swimming beaches and a variety of activities for an all-inclusive-family holiday, while luxurious spa resorts with private beaches and spectacular views are ideal for an idyllic, island paradise getaway.

If you prefer to be surrounded by culture, Zanzibar’s historical capital of Stone Town has several great hotels in and around the city.

For something a little more remote, head out to one of the island’s neighbouring atolls where islands such as Pemba Island, Mafia Island, and the private Mnemba Island are home to luxurious lodges that promise an intimate and exclusive island escape.

Dive or snorkel coral reefs, swim with dolphins, or just laze on the beach and soak up the stunning surroundings.

FlySafair is hoping to spread its wings with several new regional and international routes, including between Johannesburg and Mauritius, Windhoek, and Zanzibar.