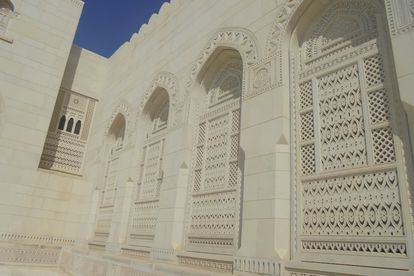 We spent much of our first evening in mystical Oman wandering around looking for a five-star hotel. Surely, we reckoned, two gorgeous gals from London could blag a drink from somewhere? But not in our four-star hotel!

When we finally laid hands on a bottle of a pleasant Stellenrust white wine, the cheapest on the five-star drinks list, our joy was abated only by the price – a mere £50. Nearly R900.  (You can buy this wine off the web for R44.)

Oman is a truly interesting and beautiful place but if you tend to take a reviving beverage at Drinks O’Clock, sort this out in advance.

Oman hasn’t been long on the travellers’ map. It is a country lined by precipitous, pleated granite and sandstone mountains of different colours, a coastline of white beaches and clear blue-green sea and undulating orange sand-dunes where Bedouins live with their camels. (I believe Omani camels were the fastest at the Gulf Camels Races this year.)

Much of Oman is a magnificent wilderness called the Empty Quarter, which it shares with its neighbours in the Gulf, UAE and Dubai in the north and Saudi Arabia and Yemen in the west.

It’s a wealthy sultanate with a population of just 4 million. Its riches date back to when frankincense was a major export, traded for gold from its empire which encompassed Zanzibar and ports in what now Pakistan and Iran. Now there’s oil and natural gas.

Muscat, the capital (‘muscat’ means ‘anchorage’), lies in a volcanic bowl, more or less divided into four quarters by mountains.  It is on the Tropic of Cancer and is an elegant city, clean, calm and organised, with few buildings higher than a few storeys and almost no crime.

The Sultan Gaboos Grand Mosque is unmissable. It has the world’s second-biggest chandelier and second-biggest one-piece rug. The walls are elaborately carved, the floors are exquisite mosaic. It is quite over-whelming. (Ladies must wear a covering scarf/shawl and men trousers rather than shorts.)

Strolling along the downtown Corniche is the labyrinthinely winding souk at Old Muttrah selling everything from plastic rubbish to frankincense and honey, and the Fish Market where tuna the size of sharks lie on slabs, their huge, dead eyes watching you.

Oman is a huge country. In the 70s there were just six kilometres of tarmac road in the entire country but that’s changed. Now you drive on perfect roads past watchtowers and 17th century crenelated forts on every hill, date plantations in the valley, wadis, oases, clusters of low-slung, flat-roofed villages, where ancient, bleached buildings stand silently, their sunken windows keeping them cool. It hadn’t rained for nine years when we went, so, sadly, the wadis were mainly dry.

Nizwa, with its massive fort, is the capital of the interior and is full of small reminders of how rural things still are there, like a sign for the Goat Market or some glorious, very old wood-carving or traders on camels clopping into town.

Further east along the pristine coast, turtles breed, dolphins frolic, sharks cruise and hardy folk trek. Perhaps the prettiest town on the Sea of Oman is Sur, where dhows are still traditionally built and the port looks like a painting from another century.

Heading south the Wahiba Sands, endless undulating giant orange sand-dunes where most 4×4 drivers can’t resist a bit of ‘dune bashing’, driving their vehicle at fearsome angles across the slopes to cruise down in a torrent of sand. Or to get stuck and wait for help!

There are several desert camps there, from glamping in sheikh tents with bathrooms or more basic camps. Whichever you choose, make sure you’re there for sunset and for sunrise. These are unforgettable moments. I could have stayed in the stillness of this nomadic Bedouin part of the country, for much much longer.

Further south, almost on the Yemen border, is Salalah, sub-tropical and lush, with coconut palms and banana trees. People from all over the Gulf go there because it’s very pretty and different. (Salalah means ‘the shining one’.) It’s a two-hour flight away from Muscat and two VERY VERY long days by car.

We had no problems in Oman, apart from the drink question.

Everyone spoke English, the electric plugs were UK style, exotic fruit and veg were purchasable in markets everywhere, meals were cheap and frequently Indian cuisine. It’s still a very traditional and old-world country. The people met were polite, friendly and very nice. Many cups of coffee were offered with a smile. They might have been strong enough to strip the enamel off your teeth but hell, they were good!

Man arrested for attack that killed mother and injured uncle