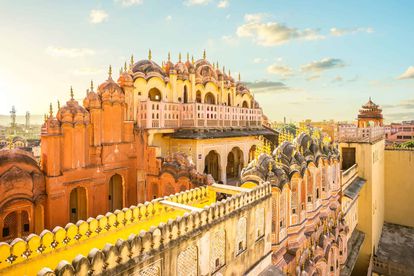 India’s magnificent landscapes are the real star of films like ‘The Best Exotic Marigold Hotel’. This is Jaipur, where much of the film and its sequel were shot. Image: Adobe Stock

India’s magnificent landscapes are the real star of films like ‘The Best Exotic Marigold Hotel’. This is Jaipur, where much of the film and its sequel were shot. Image: Adobe Stock

With its alluring cultural magnetism, colourful markets, bustling atmosphere and favourable exchange rate, India is an explosive, all-round adventure that is much loved among travellers.

But, with borders closed since March and India still battling staggering COVID-19 case numbers, it seems unlikely we’ll be sipping on chai, navigating crazy streets, marveling at ubiquitous Bollywood posters or absorbing the beauty of ancient architectural feats in person any time soon.

Luckily, we can sink comfortably into our couches and travel virtually via these classic Hollywood gems. Whether you’re wanting to add to your itinerary for when, eventually, travel is possible, or simply crave reminiscing about past adventures, here are three movies to help you escape virtually to “Incredible India.”

The Best Exotic Marigold Hotel lusciously narrates the tales of seven retirees who head to India for various reasons, anticipating a stay at a gorgeous hotel tailored to an older crowd.

After arriving, however, they discover the hotel was artfully and falsely embellished by its ambitious young owner, and they thus have to cope with unexpected conditions, life in India, and their individual personal life hurdles.

The movie, which was such a hit it also spawned a sequel, The Second Best Exotic Marigold Hotel, focuses on the characters’ authentic, day-to-day experiences and cultural encounters.

It captures the buzz of India and is shot in Jaipur. This famed and tourist-loved northern Indian city is the largest in the state of Rajasthan.

Jaipur has impressive forts, an expansive history of royals, awe-inducing palaces with intricate designs and sculptures, luxurious hotels, and, common to all Indian cities, spectacular temples.

Also called “The Pink City” owing to the pinkish tinge of many buildings here, Jaipur is commonly visited alongside Delhi, India’s capital, and Agra, home of the Taj Mahal, with the three destination cities together referred to as “The Golden Triangle”.

‘THE DARJEELING LIMITED’: FOR TRAIN TRAVELLERS AND ADVENTURERS

This colourful dramedy gives viewers insight into the reunion of three brothers who travel via a train, the Darjeeling Limited, to traverse India’s plains in order to track down their runaway mother.

Their heartwarming journey is entertaining enough, but it’s their travels and interpretations of their Indian experiences that make their on-screen ravings relatable and riveting.

The movie captures the magic of train travel, and unlike The Best Exotic Marigold Hotel, features several different destinations in India.

Place of magnificent forts and palaces

Though the movie is also mainly set in Rajasthan, the primary city featured is Jodhpur, famous for its forts and palaces. Breathtaking shots of the Himalayan mountains were filmed in another city, Udaipur, best known for glitzy royal residences and lakes.

While the train in the movie was fictional, many train-travel options, varying from cheap convenience to elaborate luxury, do exist and offer enticing routes. Darjeeling, meanwhile, is also a real place situated in West Bengal and famed for mountainous views and vast tea plantations.

‘EAT, PRAY, LOVE’: FOR SOLO TRAVELLERS IN SEARCH OF SPIRITUALITY

Liz, the main character, navigates the three countries in a solo quest to re-discover herself and find peace within her chaotic life.

After exploring Italy she heads to India, where she lives in an ashram. This is a spiritual centre where
Hindus congregate for devotional practice, meditation and spiritual rejuvenation.

Liz manages to focus on her own quest for spirituality, while also being mindful of the everyday lives and struggles of Indians.

The scenes featuring the ashram in the movie were filmed in a real ashram, the Hari Mandir in the city of Gurugram, in the northern Indian state of Haryana.

There’s no need to specifically seek out this exact ashram as they are plentiful in India, a country where spiritual connection is of such importance.

So grab some popcorn, download one of these classic flicks and indulge in a blissful Indian armchair escape while we await the real thing!