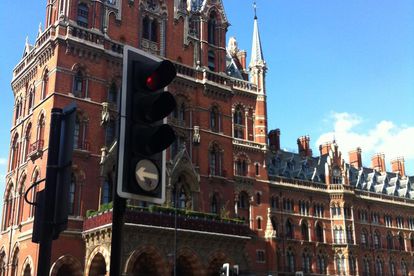 As the day of my departure from the UK dawns, one question persists: What time is your flight? The concept of heading to another country in anything other than a plane just seems incomprehensible.

The age of low cost airlines and fast international travel has made sure of this bias. But I am heading out for a long time, with a guitar! Yes my train ticket was more expensive than an Easy Jet flight to Barcelona but if you we’re to add in the extra baggage costs I would have incurred, I think things would have come out about even.

Besides, there is no time deadline to this trip and I’d like to see as much as I can of the countries I am visiting. That’s pretty hard to do from 30 000 feet.

Boarding the Eurostar in London is a doddle. My only regret was not taking a book… There is a distinct lack of scenery in the Chunnel. But iPod came to the rescue before I died of boredom on the 2-hour journey to Paris. Oh and despite some worries about carrying the guitar, no problem there. The baggage policy as expressed on their website really is very vague!

But despite everyone’s reservations, the entire train experience is painless. OK, there was a moment when I had to catch the Metro across Paris and the line didn’t go all the way to my station because of maintenance… but hey, the replacement bus service dropped me right at Garde De Austerlitz and I got my train just fine.

In keeping with my entire endeavour I also walked from Estasio Franca to Kabul backpackers on La Ramblas where I am staying. Barcelona is a walker’s paradise. Forget all those hints about busses and Metro… walk! Seeing as I couldn’t check in right away, I popped my backpack in the lock up and took a stroll down to Sagrada Familia. Of course the queue to get in was round the block but I saw plenty along the way: More Gaudi, Galleries, another cathedral and the huge food market just of La Ramblas… going low carbon footprint has many benefits I guess!

I am only in Barcelona for three days so I will be hitting the Gothic District, Parc Guell (more Gaudi!) the waterfront and whatever else catches the eye along the way. As a solo traveller, I have already met some crazy fellow travellers and no doubt they will point the way to other adventures. Right now I am just glad to have had a shower and be sitting in something that isn’t swaying (although it feels like it is of course!)

It’s been a painless start to the adventure… now just to see what happens now that I have slipped my comfort zone….

You can follow the whole story on my blog at www.davidchislett.co.za