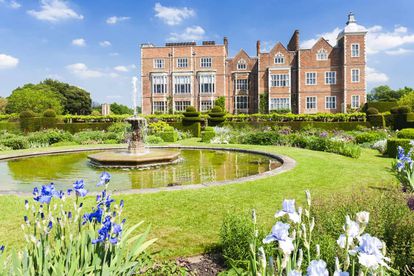 Hatfield House in Hertfordshire, England, is one of the locations used in ‘Bridgerton’. Image: Adobe Stock

Hatfield House in Hertfordshire, England, is one of the locations used in ‘Bridgerton’. Image: Adobe Stock

Fans of the popular Bridgerton series on Netflix will be delighted to know they may be able to visit the locations where all the scandalous behaviour from each episode was filmed.

Contiki Tours is asking travellers to help it decide whether to launch a Bridgerton-themed tour. The tour will include UK locations that featured in the series.

Contiki said the Bridgerton tour would be a four-day trip visiting a selection of places where the trials and tribulations of the Bridgerton and Featherington families played out.

The itinerary will take visitors to historic locations in London and Bath. Exciting activities will be included and these are sure to give the tour group all the Bridgerton feels.

In 1850, it was home to Madame Excalier’s court dressmaker. Later it became the accommodation of choice for debutantes attending balls at Buckingham Palace.

A visit to Greenwich will include Ranger’s House on Chesterfield Walk, used as the wisteria-clad exterior of the Bridgerton family home.

A guided tour of central London will include Pall Mall and the Reform Club — where Anthony Bridgerton and the Duke of Hastings meet in episode one. Travellers will also visit Lancaster House, where Lady Bridgerton had her audience with Queen Charlotte.

They’ll see a show at the Hackney Empire Theatre. This venue featured as the interior of the Opera House where Siena Rosso performed.

VISIT THE CITY OF BATH

While in Bath, the trip will include a visit to Hampton Court Palace. This is Henry VIII’s famous home and it was used as Queen Charlotte’s residence in the series.

A city tour of Bath (used in the series to recreate Mayfair), Trim Street (the exterior for Gunter’s Tea Shop) and Abbey Street (the location of Madame Delacroix’s boutique) are also included.

The Holbourne Museum of Art and the Bath Assembly Rooms, used for scenes in Lady Danbury’s mansion, will also be on the tour. Then there is Bath’s famous Royal Crescent. This building provided the front doors of both the Featherington family home and opera singer Siena Rosso’s London flat.

The trip will return to London via two prominent locations used in the series:

HOW TO MAKE A BRIDGERTON TOUR HAPPEN

Contiki Tours wants South Africans who are eager to take a Bridgerton-themed trip to express their interest via Contiki’s Instagram post below.

The company will offer the tour provided there is sufficient interest from Bridgerton fans. If the tour is launched, the trip will likely be in summer 2022, when international travel will hopefully be possible once again.

Who is Bridgerton’s new leading lady? Five things you need to know