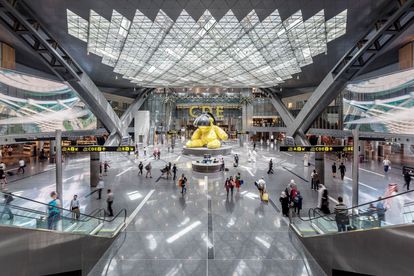 Doha’s Hamad International Airport has been awarded the number one spot in the World’s Best Airport category at the 2021 Skytrax World Airport Awards. They’ve dethroned Singapore’s Changi Airport, which was regarded as the best for nearly a decade.

HAMAD INTERNATIONAL’S CLIMB TO THE TOP

Known as the hub airport of Qatar Airlines, Doha’s Hamad International Airport is known as the most architecturally significant terminal complex in the world and the most luxurious.

The Qatari government has invested heavily in both its national carrier and its airport, with pretty spectacular results. Travelers on Qatar Airways who have a connecting flight at HIA (Hamad International) can enjoy free city tours, gratis accommodation and food (depending on the length of the layover) and a VIP transfer service where airline employees meet visitors as they de-plane and guide them seamlessly through the airport and onto their connecting flight, states a CNN travel article.

Here’s the full list of the top 10 in the ‘World’s Best Airport’ category published on Skytrax’s website:

Skytrax conducts an airport customer satisfaction survey, where the World Airport Awards are voted for by customers from a 12-month period, it started in August 2020 and concluded in July 202.

ALSO READ: Hours at airports? Not if SA can sort a digital vaccine certificate

The independent airline industry consulting group chose to recognise the airports that did well to address the COVID-19 health protocols and other precautions. Well known airports such as the Dubai International Airport, Barcelona Airport and Sydney Airport made the list along with 36 others.

The other winners were the Munich Airport voted as the best in Europe, Tokyo’s Haneda airport got the best in Asia award, the world’s best domestic airport and the cleanest. The Istanbul Airport was voted as the most improved.