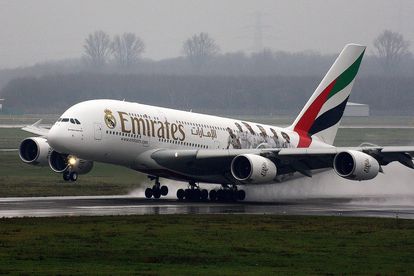 Emirates Airlines opens up flights to and from several African countries but not South Africa. Image : Pixabay

Emirates Airlines opens up flights to and from several African countries but not South Africa. Image : Pixabay

Not seen in the South African skies for well over a year and a half, the largest passenger aircraft in operation, the Airbus A380, now makes a daily appearance at Johannesburg’s OR Tambo International Airport.

The Airbus A380, a large passenger aircraft that has the capacity to carry over 800 passengers per flight, is popular with many airlines for use on routes where there is a high demand from passengers.

The pandemic resulted in border closures and a slew of restrictions on movement – which forced many carriers to ground their fleets entirely or to operate fewer flights with smaller aircraft.

Passenger volumes declined all over the world, causing airlines to rethink their strategies with regard to their fleets.

A number of airlines predicted that there would no longer be a need for bigger aircraft that could carry large numbers of passengers beyond the pandemic, as demand for travel and tourism was expected to drop significantly, and remain low.

MOTHBALLING OF A380 AIRCRAFT

Most airlines that own and operate Airbus A380 aircraft, sent these aircraft to storage facilities in places such as the Mojave Desert (USA) and the Australian Outback to preserve them while not in use.

Airlines including Air France, British Airways, and Lufthansa said they would be retiring certain aircraft types (mainly Boeing 747s and Airbus A 380s) which were said to no longer be fit for purpose and would not return to service post-Covid-19 when altered travel patterns were expected to emerge.

With many countries now easing entry restrictions or having reopened their borders to fully vaccinated travellers, there is a surge in demand for air travel.

This has led to rising ticket prices on certain routes where demand is high but capacity is constrained.  Airlines too have realised that demand for travel is bouncing back and that there is a need for aircraft that are able to transport large numbers of passengers per flight.

A380 SERVICES TO JOHANNESBURG

Emirates Airlines, which owns a number of Airbus A380 aircraft, has hauled several of its largest passenger jets out of storage as a result of the rising passenger demand.  The airline is redeploying some of its Airbus A380s on several routes.  Johannesburg is one of these.

Passengers travelling on Emirates’ daily scheduled flights (EK 761 and EK 762) between Dubai and Johannesburg will again be able to enjoy the comfort and spaciousness offered when flying on the Airbus A380 aircraft.

By the end of the year, Emirates hopes to have reactivated around 50 of its Airbus A380s. The airline relaunched Airbus A380 flights to six destinations on 31 October. Emirates seems intent on proving that the Airbus A380 still has a place in the post-pandemic aviation industry.