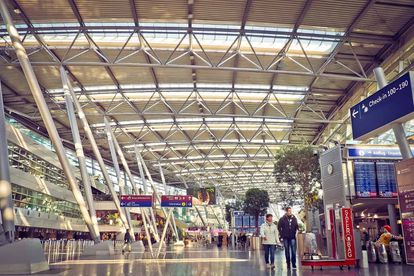 If you have been through Johannesburg’s OR Tambo International Airport recently you would not be wrong in thinking the place is just a shadow of its former self.

The pandemic has had a huge impact on the global travel and tourism sectors which has resulted in reduced frequencies of flights due to reduced demand for air travel.

While there has been a notable increase in the number of passengers travelling on flights since the start of the pandemic, passenger numbers at SA airports are significantly down compared to pre-COVID times.

Traffic at South Africa’s once busy international airports is just a fraction of what it used to be and things are not about to get better anytime soon. The International Air Transport Association (IATA) does not expect passenger numbers to rebound to pre-COVID levels for another two to three years.

The state-run organisation which operates the country’s major airports, the Airports Company South Africa (ACSA) is in an unfavourable position, with large amounts of debt.

ACSA CEO Mpumi Mpofu presented a stakeholder report on Monday 5 April. During the financial year ending 31 December 2021, ACSA reported a loss before tax amounting to R924 million. This is on the back of a loss of R2.5 billion in the previous financial year.

Credit rating agency Moody’s has decided to maintain its negative outlook for South Africa’s state-owned ACSA. This is due to ACSA’s debt burden, as well as uncertainties about prospects for a recovery in air traffic after the pandemic’s devastating impact.

The report shows that passenger movements at ACSA airports still remain down.

Domestic travel at airports run by ACSA has recovered to 56% of pre-COVID-19 traffic, while regional and international traffic segments are still lagging behind.

The domestic segment currently accounts for 83% of ACSA’s total traffic in the current financial year. Pre-COVID-19 this segment accounted for 70% of total traffic.

Eurowings Discover (a subsidiary of Germany’s Lufthansa Airlines, which offers long-haul leisure flights) has begun already flying from Frankfurt to Victoria Falls in Zimbabwe and will offer direct flights between Germany and the Kruger National Park in November this year.

These flights are aimed at conveniently bringing passengers from Europe to preferred tourism destinations in the Southern African region, without the need to connect through other international airport hubs.

This is bad news for ACSA’s three international airports (Johannesburg, Cape Town and Durban), as well as for local airlines which benefit by offering feeder services for overseas connecting passengers heading to Victoria Falls and the Kruger National Park.

“With the launch of our brand new Victoria Falls flights, we are now able to offer our customers a direct connection between Europe and the diverse Kavango-Zambezi region. This area is of particular importance to our leisure airline Eurowings Discover, as we continue expanding our portfolio into attractive touristic destinations in Africa,” Lufthansa Group, Southern and East Africa general manager Dr Andre Schulz said, according to Travelnews..

“Furthermore, we believe in sustainability and by introducing our new direct Eurowings Discover service to Victoria Falls, we are playing an active part in rebuilding the local tourism industry in Zimbabwe as well as in the neighbouring countries.”