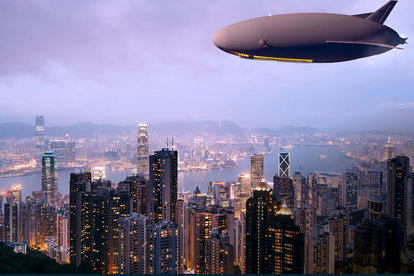 Arriving in Hong Kong on an airship might not be far off. The Airlander 10 is set to enter service by 2025. Image : HAV

Arriving in Hong Kong on an airship might not be far off. The Airlander 10 is set to enter service by 2025. Image : HAV

Airships are a relic of the past but they are set to make a comeback in the near future. A company producing airships has revealed designs for an airship it intends to launch within the next four years.

Hybrid Air Vehicles (HAV) has plans for an airship called the Airlander 10, which it aims to bring into production in the near future. The company hopes to have the Airlander 10 in service by 2025.

Good News Network reports that HAV’s short-term goals are to fulfil legal requirements for the Airlander 10, and then to get their UK factory producing 12 aircraft per year.

Furthermore, HAV has future plans to develop electric-powered airships which would make its airships totally green and emission-free.

The Airlander 10 has been designed for use on shorter regional routes.  It can cover a range of 4 000 nautical miles (7 400km).  The airship will fly at lower altitudes,  producing extremely low CO2 emissions compared to other forms of transport.

The Airlander 10 is capable of flying at speeds of 80 miles per hour (130km). It uses a combination of lift provided by the large helium-filled body, and propulsion produced by a hybrid electric motor.

Flying at 20 000 feet and operating at slower speeds takes away the need for an airtight, pressurised cabin. This allows an Airlander’s passenger areas to differ from those of traditional commercial aircraft.

The Airlander 10 is designed to seat up to 100 passengers. Cabin designs released by HAV indicate a spacious lounge-like cabin for passengers to travel in. This contrasts with the tightly packed rows of seats most of us are used to when taking short-haul flights in a conventional aircraft cabin with high density seating arrangements.

The Airlander’s cabin is surrounded by full-height windows which offer passengers some exceptional aerial views.  Since the Airlander will fly at low altitude and it will not travel at high speed, passengers can take in panoramic views of the cities and countryside below.

HAV says that the Airlander 10 offers exceptional efficiencies.

Its airship will help to reduce CO2 emissions in the aviation sector.  Journeys made by an Airlander 10 will offer CO2 reductions of up to 75% compared to equivalent journeys operated by commercial jet engine aircraft.

Though an airship would take more time to cover distances, the environmental benefit of flights operated by an airship are clearly evident.

ALSO READ : Is the era of electric flight upon us? Major airline orders electric planes

HAV hopes the Airlander 10 will be favoured by transport operators for a range of functions. The Airlander will be useful in countries like France which has recently banned domestic commercial flights operating on short distance routes.

It will also be useful in locations where other transport services, including road or rail connections, are unavailable. Or even across water or mountainous terrain, if there are no existing transport services.

The Airlander is capable of landing on any surface including water – which makes it a very attractive option for transport providers.  Little infrastructure is required to safely operate an airship, compared with the infrastructure required for a conventional airport, harbour, railway network or highways.

Capable of landing and taking off from virtually any flat surface – on land, at sea, on ice, or in the desert – the Airlander 10 opens up previously inaccessible areas to adventure and exploration.

HAV is hoping to introduce its airships for adventure travel in remote places such as polar regions, deserts and among archipelagos.  With the Airlander, passengers can be safely set down in some of the world’s most remote and inaccessible locations.