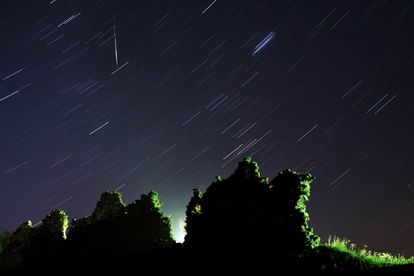 A long exposure picture shows a meteor crossing the night sky and stars trails above the ruins of a medieval castle in the village of Kreva, some 100 km northwest of Minsk, on 12 August 2019. Photo: AFP/Sergei Gapon

A long exposure picture shows a meteor crossing the night sky and stars trails above the ruins of a medieval castle in the village of Kreva, some 100 km northwest of Minsk, on 12 August 2019. Photo: AFP/Sergei Gapon

The Taurids meteor shower is one of the most spectacular events – and most long-lasting – of the year. It will peak from 5 to 7 November 2019.

Unlike the October’s Orionid meteor shower, the Taurids has two streams and can be split into the Northern Taurids and the Southern Taurids.

They take place on 10 October, another near 1 November and the final peak around 15 November. The Northern Taurids has just the one peak, approaching on 5 November.

What are the Taurids?

According to NASA, the Taurids are leftover particles from the Encke Comet, named after their radiant point in the constellation Taurus.

Encke and the Taurids are believed to be remnants of a much larger comet, which has disintegrated over the past 20 000 to 30 000 years, according to the Royal Astronomical Society:

Will it be visible from South Africa?

Yes, skywatchers in both the Northern and Southern hemispheres will be able to view the Taurids meteor shower; however, the peak viewing times will differ.

The show will go down between 1:00 and 2:00 local time. Apart from the South Pole, the Taurids are visible practically from anywhere on Earth.

How to view the Taurids meteor shower

To find Taurus, look for the constellation Orion and then peer to the northeast to find the red star Aldebaran – which means The Follower. It is the brightest star in the bull’s eye.

If you can get out of the city and away from light pollution, by all means, do that. Take a blanket or comfortable chair and go early. Your eyes will need about 20 to 30 minutes do adjust to the dark.

You don’t even need any special equipment or a lot of skills to view a meteor shower; all you really need is a clear sky and lots of patience.

Back in 1908, a Taurid meteor shower flattened a large part of Russia. Known as the Tunguska event, the explosion over Siberia was the biggest ever documented; the equivalent of 185 Hiroshima bombs.

Some scientists believe the Tunguska meteor was once a larger-than-average object within the Taurid shower, based on the object’s predicted trajectory through the atmosphere.

Fear not, nuke-like explosions aren’t on the cards for us in 2019, and viewing the meteor shower should be perfectly safe. Be careful of bug bites, though.

These clips are streaming live from Kingman, Arizona