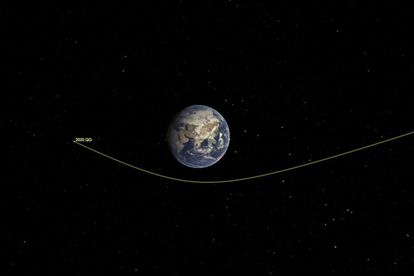 Asteroid 2020 QG’s trajectory bending during its close approach to Earth. The asteroid is the closest known non-impacting asteroid ever detected. Sunday, Aug. 16 2020. Graphic:NASA

Asteroid 2020 QG’s trajectory bending during its close approach to Earth. The asteroid is the closest known non-impacting asteroid ever detected. Sunday, Aug. 16 2020. Graphic:NASA

A colossal space rock is on course to swing by our planet early in the New Year, US space agency NASA has warned.

Before that, this year’s final asteroid, the 2020 YB4, measuring 36 meters in diameter or roughly half the wingspan of a 747, passed by the Earth shortly after 6am UTC at a distance of 6.1 million kilometers.

That means, in terms of the threat posed by space rocks at least, the planet made it out of 2020 somewhat intact.

However, in the first days of January, three additional, small Near Earth Objects (NEOs) will grace the Earth with their presence, for a brief time.

NASA has revealed that the asteroid will fly by Earth at just 4.1 times the distance between the Earth and the Moon, the equivalent of roughly 979,094 miles from our planet.

Although that seems like a sizeable distance, it is close enough for NASA to determine it to be a ‘near Earth object. (NEO)’

Remnants of the solar system

NEOs are remnants of the solar system and as such NASA can use them to study the history of our host star and its orbiting planets.

NASA said on its Jet Propulsion Laboratory (JPL) website: “NEOs are comets and asteroids that have been nudged by the gravitational attraction of nearby planets into orbits that allow them to enter the Earth’s neighbourhood.

“The scientific interest in comets and asteroids is due largely to their status as the relatively unchanged remnant debris from the solar system formation process some 4.6 billion years ago”, NASA said.

Daily devotion: Your bible verse and prayer for 03 July 2022