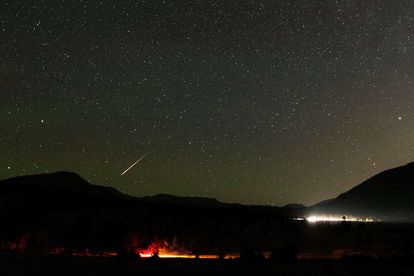 A Perseid meteor is seen over Rocky Mountain National Park in Colorado in the early morning hours of August 13, 2018, competing with lights from vehicles on nearby roads. – The annual Perseid meteor shower peaks in the early August. The green sky is airglow, a phenomenon of the upper atmosphere seen at night. Photo: AFP/STAN HONDA

A Perseid meteor is seen over Rocky Mountain National Park in Colorado in the early morning hours of August 13, 2018, competing with lights from vehicles on nearby roads. – The annual Perseid meteor shower peaks in the early August. The green sky is airglow, a phenomenon of the upper atmosphere seen at night. Photo: AFP/STAN HONDA

Unfortunately, the Perseid meteor shower won’t be visible from South Africa as they are below the horizon. However, we live in the age of the internet and there’s always a workaround. Here’s how to make the most of it!

Perseid Meteor Shower — What you need to know

How can I see the Perseid meteor shower?

If you’re not currently in South Africa, astronomer Anna Ross from the Royal Observatory Greenwich said the best time to view the shower would be between late Wednesday evening and the 5:30 on Thursday morning.

“During the peak night of the shower, you will be able to find it in the north-east of the sky, getting higher throughout the night. You don’t have to be able to see Perseus to spot meteors, however, as they will be moving away from the radiant across the whole sky in every direction”.

But considering that we’re not in the prime seats for the meteor shower, we’ll have to turn to the internet to get our meteor shower kicks. The CosmoSapiens channel has camera set up with a long-running live stream, watch it below:

Tonight’s meteor shower is one of the best-known and brightest meteor showers. According to the Bronberg Weather Station in Pretoria, Earth could witness up to 150 streaks per hour, although that’s a very generous estimation.

According to NASA, the peak of the shower in the northern hemisphere coincides will coincide with the last quarter moon phase, also known as a bright half-moon. This will have an impact on visibility on some areas.

What exactly are the Perseids

The Perseid meteor streams are groups of meteoroids originating from dust grains ejected from Comet 109P Swift-Tuttle. These small dust grains are called meteroids, and are distributed along the parent comet’s orbit.

Earth is currently passing though that 26-kilometre-wide stream of dust particles. If you’re situated in the northern hemisphere, the peak of Perseid meteor shower will be on Wednesday evening, 12 August 2020.

“All meteors associated with one particular shower have similar orbits, and they all appear to come from the same place in the sky, called the radiant. Meteor showers take their name from the location of the radiant. The Perseid radiant is in the constellation Perseus. Similarly, the Geminid meteor shower, observed each December, is named for a radiant in the constellation Gemini”.