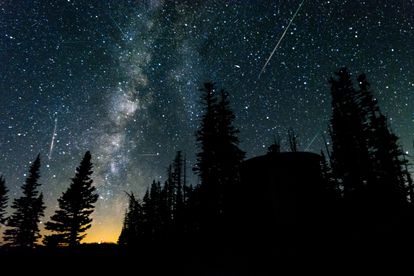 The Lyrids meteor shower marks the first significant meteor shower we’ve had in 2020. It will be visible from Thursday 16 April to Saturday 25 April; the shower will peak on Tuesday evening, 21 April.

According to the Bronberg Weather Station in Pretoria, viewing the meteor shower is as simple as going outside, finding a dark spot and looking north-north-east towards the Lyra constellation.

The American Meteor Society reported that the Lyrids could at times “produce bright meteors and an occasional fireball”. If you happen to spot a fireball, notify the Society by using this form.

What is the Lyrids Meteor Shower?

The Lyrid meteors are leftovers from Comet Thatcher, also known as Comet C/1861 G1 Thatcher; and Lyrid meteor streams are groups of meteoroids originating from dust grains ejected from the comet.

Meteoroids are small dust grains which are then distributed around the comet’s orbit. We get to see the meteors every time Earth passes through that stream of dust particles.

Thatcher is one of the eight greatest comets of the 19th century, but it won’t pass by our neck of the woods again any time soon. The last perihelion – when it was visible from Earth – was on 13 May 1861. Then next perihelion will be in 2265.

When is the best time to view the Lyrid meteor shower

According to the Bronberg Weather Station, Earth will move through the centre of the comet’s dust trail on the evening of Tuesday, 21 April 2020.

Between 2:00 and dawn would be the best time to view. On a clear night, you can expect to see 18 streaks an hour, but perhaps even more during the peak times. Keep looking north!

Folks in the Northern Hemisphere will be in the good seats for this one, but we will still be able to see some of the action too. The visibility of the meteor shower also depends on the weather and light pollution.

The best way to view the Lyrids meteor shower

Getting away from the city and light pollution would be a start. If you have a telescope, by all means, crack it out, but the meteor shower will be visible to the naked eye.

Find a comfortable spot and lay down or sit with their head tilted back, looking north and upward while taking in as much as they sky possible.

You’ll need to locate the Puppids constellation. It is situated in the same vicinity as the Pictor, Dorado and Canna constellations.

But don’t look directly at the Lyra constellation, as it would make the meteors appear to have short tails. Instead, look at the sky as a whole, and the meteors will be more likely to appear with a long tail.