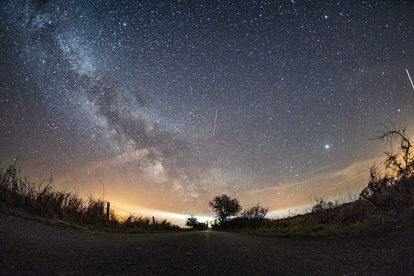 The milky way and meteors of the April Lyrids annual meteor shower are seen in the night sky over Burg auf Fehmarn on the Baltic Sea island of Fehmarn, northern Germany, on 20 April 2018. Photo: AFP/Daniel Reinhardt

The milky way and meteors of the April Lyrids annual meteor shower are seen in the night sky over Burg auf Fehmarn on the Baltic Sea island of Fehmarn, northern Germany, on 20 April 2018. Photo: AFP/Daniel Reinhardt

The Lyrids meteor shower – one of the oldest known meteor showers – is usually active between 16 and 25 April every year; and tends to peak between 21 and 23 April.

When can I see the Lyrids meteor shower?

The Lyrids meteor shower is going to peak on Tuesday night, going into Wednesday morning. Lyrids will be at it’s most visible in South Africa between 2:00 and 4:00 on Wednesday 22 April.

Better set those alarms! In addition, the Lyrids meteor shower is visible in both hemispheres. According to Time And Date, we could (if we’re lucky) see up to 18 meteors per hour.

Will I need special equipment?

It might enhance your viewing experience, but it’s still visible to the naked eye. The moon’s glow might reduce the effect the shower will have in the sky, but telescopes and binoculars remain non-essential viewing tools.

If you’re unable to see the meteor shower, you can also tune into the ComsoSapiens live stream, which will go live at 0:00 on Wednesday 22 April.

What is the best way to see a meteor shower?

You’ll need to locate the Pi-Puppids constellation for this one. It might be a challenge for some years, as we’re not allowed to roam freely outside.

If you have a garden, head out there. Take a blanket and a comfortable chair. Watching meteors, just like any other kind of stargazing, is a waiting game, and you need to be comfortable.

Find a comfortable spot to lie on the ground and look up. Simple as that! Your eyes will need about 20 to 30 minutes to adjust to the dark.

What is the Lyrids meteor shower?

The Lyrid meteor shower is named after the Lyra constellation and is leftovers from Comet Thatcher, also known as Comet C/1861 G1 Thatcher.

Thus, the Lyrid meteor streams are groups of meteoroids originating from dust grains ejected from the comet. Meteoroids are small dust grains which are then distributed around the comet’s orbit.

When will Comet Thatcher pass by again?

We get to see the meteors every time Earth passes through that stream of dust particles. The first recorded sighting was in China, more than 2 500 years ago.

It takes the Comet Thatcher approximately 415 years to orbit around the sun, and we won’t get to see it again soon. It was last visible from Earth on 13 May 1861; the next perihelion will be in 2265.