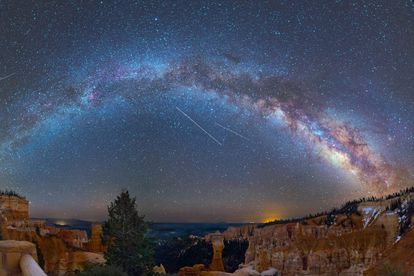 Just two weeks after the Lyrids meteor shower, the Eta Aquariid meteor shower shoots by. The meteor shower will peak on 5 and 6 May 2020 as Earth passes through the orbit of Halley’s Comet.

According to the Bronberg Weather Station in Pretoria, the Eta Aquariids meteor streams are groups of meteoroids originating from dust grains ejected from Comet 1P Halley.

Halley’s Comet will only be making its 31st return in 2061. However, you don’t have to wait 41 years for the comet to return, bits and pieces of Halley will rain down on Earth tonight, so to speak.

Eta Aquariid Meteor Shower: Here’s what you need to know

What is the Eta Aquariid Meteor Shower?

The meteoroids are distributed around the comet’s orbit. We get to see the meteors every time Earth passes through that stream of dust particles, or the debris left behind by the comet.

These pieces enter the Earth’s atmosphere and burn up. They create the meteor shower, or shooting stars, as we often refer to them. The Eta Aquariids meteor shower is known for producing the most intense meteor streams.

Halley’s Comet, officially known as 1P/Halley, was observed by Edmond Halley in 1682. It only passes through our region every 75 years. The last perihelion was in February 1986, and the next perihelion will be in 2061.

When is the best time to view the meteor shower

According to Bronberg Weather Station, the meteor shower is active between 19 April and 28 May. However, the peak time to view would be tonight, 5 May, from around 22:00.

On a clear night, you can expect to see 40 streaks an hour, but perhaps even more during the peak times. Keep looking east! Even if you miss it tonight, you might still see a few streaks up to 8 May.

How’s the weather on Tuesday 5 May?

Visibility also depends on the weather and light pollution. According to Accuweather, Johannesburg, Cape Town and Durban will have clear skies tonight.

The best way to view the Eta Aquariids

Since we can’t get away from the city and light pollution, you are left with no other choice but to view from your garden, balcony or window. If you have a telescope, by all means, use it.

However, the meteor shower will be visible to the naked eye, providing your view isn’t obstructed by buildings or trees. But don’t look directly at the Lyra constellation either.

That would make the meteors appear to have short tails. Instead, look at the sky as a whole. The meteors will then be more likely to appear with a long tail.