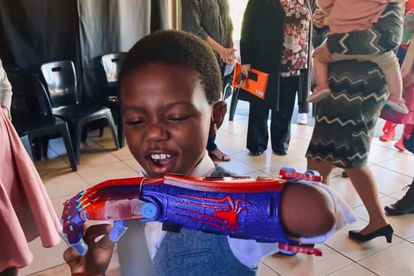 The Helping Hands project is an initiative that aims to provide prosthetics for children and adults with limb differences, for free.

A nine-year-old boy from uMlazi – who had been born without a right hand – was the first child in South Africa to receive a prosthetic.

The Spiderman-themed 3D prosthetic arm bends at the elbow. The prosthetic encloses Aphelele’s hand and fingers, allowing him to grip on to objects.

Mitchell explained on social media that Aphelele is a “massive fan of Spiderman.” He decided to “make him some awesome superhero Spidey Hands,” based on the new Spider-Man movies.

Mitchell adds that the revolutionary 3-D printed prosthetic limb design is now officially being used in South Africa and explains:

“This exciting new platform was inspired by the story of Phoebe Dyer of Great Britain, whose success in overcoming her limb difference prompted this collaborative to extend their reach to South Africa.”

Aphelele’s father, Nkumbulo Gumede, told IOL that he is very happy for his son. His parents said it was frustrating to explain Aphelele’s condition to curious strangers. It had lowered his self-esteem.

To overcome his embarrassment, his parents showed him examples of athletes who had physical challenges. It motivated Aphelele to accept his situation and “grew to be a lively and talkative boy who loves to swim.”

There are many ways to support Enabling the Future and Deloitte UK, from donating to volunteering. In addition, the blueprints for building and 3-D printing a hand can be downloaded from their websites.

If you do not have access to a 3D printer of your own, the site has “3D Printing Options” page with links to libraries, makerspaces, schools, and fablabs where you can find more information on making someone’s dream come true.

Watch: Aphelele Gumede using the hand for the first time