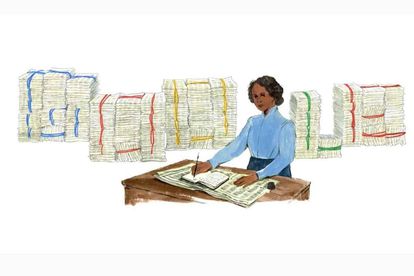 “Were it not for the monster of slavery, we would have a common destiny here, in the land of our birth”.

Mary Ann Shadd Cary was also the second Black woman to earn a law degree in the United States and was known as a “courageous pioneer in the fight for abolition and women’s suffrage”.

Shadd, the eldest of 13 children, was born on 9 October 1823 in Wilmington, Delaware, to parents who were dedicated abolitionists. According to Google, her parents turned their home into a safe haven for escaped slaves.

The family moved to Pennsylvania when the education of African-American children was declared illegal in Delaware. Shadd graduated from the Quaker Boarding in Pennsylvania in 1840.

After graduation, Shadd returned to East Chester, a town in southern Westchester County, New York, and established a school for Black children. Later on, she also taught in Norristown, Pennsylvania, and New York City.

Activism, career and ‘The Provincial Freemen’

Her work was published by Frederick Douglass in his newspaper, The Northern Star, in 1948, which was described as a bold call to action for the abolitionist movement, and to improve life for African-Americans.

“We should do more and talk less.”

The Shadd family moved to Canada in the wake of the Fugitive Slave Act of 1850, which was a major threat to Black people in the United States. Three years later, Shadd launched her historic newspaper, The Provincial Freemen.

It was a weekly Black publication geared especially toward escaped slaves. For her invaluable contributions to Canadian history, Shadd Cary was honoured by the country in 1994 as a Person of National Historic Significance.

Following his death, Shadd Cary and her children returned to the United States, where she served as a recruiting officer to enlist Black volunteers for the Union Army in the state of Indiana.

Not long after this, Shadd and her children moved back to the United States, where she attended Howard University in Washington, D.C. She continued to teach in Wilmington and Washington DC.

Shadd graduated from the Howard University at the age of 60 in 1883, becoming the second black woman in the United States to earn a law degree. She passed away on 5 June 1893, in Washington, D.C from stomach cancer.