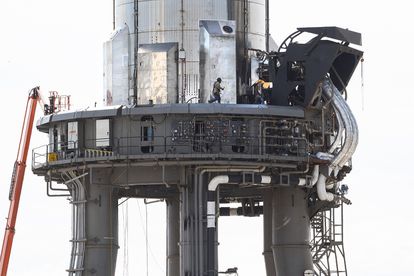 A man walks across the platform holding SpaceX’s first orbital Starship SN20 stacked atop its massive Super Heavy Booster 4 at the company’s Starbase facility near Boca Chica Village in South Texas on February 10, 2022. – Elon Musk’s SpaceX has reassembled the world’s tallest rocket ahead of a highly anticipated update on the company’s Starship program in South Texas. Photo: JIM WATSON / AFP

A man walks across the platform holding SpaceX’s first orbital Starship SN20 stacked atop its massive Super Heavy Booster 4 at the company’s Starbase facility near Boca Chica Village in South Texas on February 10, 2022. – Elon Musk’s SpaceX has reassembled the world’s tallest rocket ahead of a highly anticipated update on the company’s Starship program in South Texas. Photo: JIM WATSON / AFP

Addressing an audience at the company’s Starbase facility near Boca Chica, south Texas, the tycoon merely said: “I feel at this point highly confident that we’ll get to orbit this year,” while hinting at a potential pivot to launching from Florida if the company encounters regulatory hurdles.

Musk was speaking against the impressive backdrop of the spacecraft in its fully-stacked configuration, standing 394 feet (120 meters) tall, with a matte black upper-stage placed on a shimmering silver Super Heavy first-stage rocket.

Together, they make the biggest spacecraft ever built: taller than even the Saturn V rockets that took astronauts to the Moon during the Apollo era.

Made of stainless steel and designed to be fully reusable, Starship is also intended to be the world’s most powerful rocket, and will be capable of lifting up to 100 metric tonnes to Earth orbit.

SpaceX envisages the ship carrying crew and cargo to the Moon, Mars and beyond — and last year, NASA awarded the company a contract for a version of Starship to ferry astronauts on the Artemis program from lunar orbit to the surface.

In his first detailed progress report on the project since 2019, Musk recapped his ultimate vision for colonizing Mars as a “life insurance” in case of catastrophe on Earth, and as the first step in expanding humanity’s footprint beyond the solar system.

The speech was peppered with dry humor, such as his “sales pitch” for Mars: “It’s going to be cramped, dangerous, difficult, very hard word, you might die” — though he eventually hopes to terraform the Red Planet.

Musk also included some updates for fans, such as an illustration of how one Starship would be sent to refuel another on deep space voyages, and the thrust advantage and neater design of the latest generation of Raptor engines compared to the first iteration.

Each Starship booster is planned to have 33 Raptors, and a bottleneck in the production is expected to ease in the coming weeks, with as many as one engine manufactured per day by next month, said Musk.

He also revealed that within years the cost of launch could be as little as $10 million — a price point that could revolutionize the industry by making rockets attractive for commercial transportation purposes.

A flight to Singapore from the US is 20 hours “while in a rocket it would be less than an hour. So like 45 minutes or there abouts.”

Starship’s upper stage has already made several suborbital flights. After multiple tests that ended in impressive explosions, SpaceX finally succeeded in landing the spacecraft last May.

But a far more ambitious orbital test is pending an environmental impact clearance from the Federal Aviation Administration.

The FAA said in a December release it would deliver a report by February 28.

Musk said that while he was optimistic of receiving approval, he was prepared to shift launch operations to the company’s launch site at the Kennedy Space Center in Florida, if it was held up.

Former deepwater oil drilling rigs the company has acquired to convert into rocket launch and land sites could also come into play, he added.

Beyond exploration missions, Starship’s tremendous payload capacity could also be a boon for astronomers seeking to place bigger telescopes into space, while the US military has given SpaceX a five-year contract to demonstrate its capacity to whizz cargo around the world in ultra quick time.

Japanese billionaire Yusaku Maezawa has contracted Starship for a journey around the Moon with a crew of artists, and Musk hinted there would soon be “future announcements that I think people will be pretty fired up about,” without divulging more.