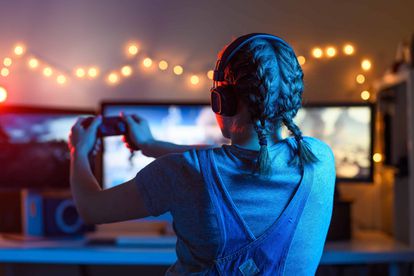 Gather around, folks. Epic Games Store is giving away not one, not two, but three free games this week: 20XX, Barony, and Superbrothers: Sword and Sorcery. It will be available for a limited time only.

Last week’s giveaways were Next Up Here and Tacomo, read more about it here. If you missed your chance to get it for free, you can still get it, but it will cost you: R151 for Next Up Hero, and R135 for Tacoma.

20XX is a roguelike action platformer developed and published by Batterystaple back in November 2014. The object of the game is to play with a friend. Yep, that’s right…

“Jump and shoot your way through ever-changing levels, collect awesome new powers, and battle mighty bosses in the name of saving the human race maybe”.

If you like roguelikes then this is for you, although personally, it would not be my first choice when looking for something to play. That said, this is purely a personal preference and doesn’t reflect on the game itself.

In addition to jumping and shooting your way through to the next level, the game also features full-co-op and supports one to 2 two players locally or online. You have until 6 August to download the game for free. Get it here.

Barony is a “premier first-person roguelike” developed and published by Turning Wheel LLC. Make your way past cryptic items, brutal traps and devious monsters as you slay the bad guys and collect treasure.

“Barony is a love-note to RPG classics like ‘Ultima Underworld’, ‘System Shock’, and ‘Daggerfall’, created by fans of the classics.”

This game grew on me after a while. It reminds me of a silly game I used to play on my first PC back in the early nineties, but for the life of me, I can’t remember what it was called. I was a pre-teen then, and memory loss is a sign of growing older, apparently.

You have until 6 August to download the game for free. Get it here.

Superbrothers: Sword and Sorcery — which features songs and sounds by the award-winning Jim Guthrie — was developed and published by Capybara Games back in April 2012.

Your mission, if you choose to accept it, is to help a wandering warrior monk complete her woeful errand. You have until 6 August to download the game for free. Get it here.

The landmark action-adventure crafted by Superbrothers and the video game wizards at CAPY,

Previous deals from the Epic Store

Next Up Hero, which was developed by Digital Continue and published by Aspyr Media Inc back in January 2018, is a dungeon crawler RPG (role-playing game) filled to the brim with hand-drawn heroes.

It is a dungeon crawler featuring hand-drawn heroes that hack, slash, bongo-drum, boomerang, and jet their way through Ventures. Choose your hero and start exploring the dungeons straight away. Gear up, gear out and max your stats to progress in the game.

Tacoma which was developed and published by Fullbright back in August 2017, is an adventure Indie game. It’s weird, to say the least… But quite enjoyable.

The crew of Lunar Transfer Station Tacoma were going about their workaday lives when disaster threw them into chaos. It’s now up to you to discover what fate awaits your crew.

The game is bold, it’s innovative and an intriguing follow up to the acclaimed Gone Home