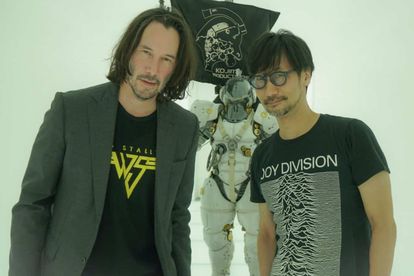 Cyberpunk 2077 is set to break all kinds of records this week and dominate headlines as reviews and opinions pour in after its 10 December release. However, it’s currently trending because of Hideo Kojima.

The Death Stranding and Metal Gear Solid creator makes an appearance in Cyberpunk 2077. He’s not really all that friendly, and we kind of didn’t expect him to be anything else, to be honest.

Kojima does have the tendency to pop up in unusual places, and his appearance in Cyberpunk 2077 was confirmed when Reddit user Axepirate posted a video showing Kojima in a bar.

The legend himself appears as a character named Oshima. Even though he speaks Japanese, your cybernetic implant translates the conversation and you learn that he’s discussing the idea of genre tropes.

According to Oshima, a research team in Tokyo is experimenting with capturing the full range of human feelings. He explains that he wants his “production to convey real, raw emotion”, and adds:

“Take, for example, the feeling when you combine happiness with melancholy, or being calm with an underlying sense of anxiety”.

Watch this before you play

Oshima sports the same hairstyle and glasses is Kojima and wears a jacket similar to the game creator’s favourite piece of clothing. If you interact with Oshima, he’ll ask if you know his work, or if you have a movie pitch.

And in case you still aren’t convinced: Oshima is an alternative pronunciation for Kojima. Oshima means “large island” while Kojima means “small island”, roughly translated. Coincidence? We think not.

You will run into Hideo during The Heist mission with Jackie Welles while at Night City’s most prestigious entertainment hub, the Konpecki Plaza; which is an Arasaka facility in the Arasaka Waterfront, situated in Watson.

We don’t want to give too much away, because The Heist is one of those really important missions with plenty of mind-blowing spoilers. At some point at the start of the mission you’ll be given two options:

Choose the latter, head over to the bar, and you’ll find him at the back of the room, to the right of the pink counter.

Cyberpunk 2077 features other well-known cameos as well. Other than Keanu Reeves, you could also see Grimes, Elon Musk and Michael Leon-Wooley

Also read: Free Xbox games: These are your ‘Games with Gold’ titles for December 2020