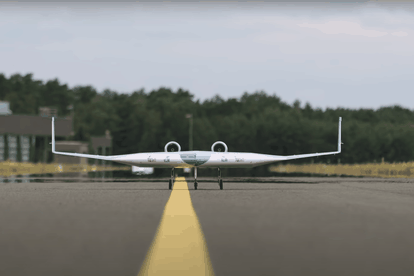 Researchers in the Netherlands produced a model of a futuristic passenger aircraft, called the Flying-V. The successful test flight was the first step in the developmental process of the aircraft.

Engineers and researchers were pleased with results but still need to enhance the model’s design and conduct more tests on the aircraft which they expect could be in operation between 2040 and 2050.

The Flying-V’s unique design, places the passenger cabin, the cargo hold and the fuel tanks within the aircraft’s wings. This gives the aircraft an enhanced aerodynamic shape, which in turn offers increased fuel efficiency.

The Flying-V is designed to be a fuel-efficient, long-range passenger aircraft which would seat up to 314 passengers in a two-class configuration, at full scale.

Researchers state that the Flying-V’s unusual design would result in reduced fuel consumption of approximately 20% less than that of an Airbus A350, which is known to be the most fuel-efficient large passenger aircraft.

Fuel efficiency is very important for airlines since fuel is one of the major expenses in an airline’s operating costs.

Observations during the test flight

The model aircraft performed a successful test flight yet there were areas which experts said needed improvement. Assistant professor Roelof Vos, from Delft University’s aerospace engineering faculty, said that his team initially were concerned about the lift-off stage of the flight.

Professor Vos said, “One of our worries was that the aircraft might have some difficulty lifting-off since previous calculations had shown that ‘rotation’ could be an issue.”

Remotely controlling the aircraft, the research team noted a take-off speed of 80 kilometres per hour, while noting that the aircraft’s flight speeds, angles and thrust were as planned.

“The team optimised the model aircraft to prevent the issue but the proof of the pudding is in the eating. You need to fly to know for sure,” Vos said.

An issue that the team observed was the amount of roll when landing the aircraft. This, researchers claim, is due to the aircraft’s shape. Researchers said it was difficult to keep the wings level during the landing phase. The test flight showed that the aircraft’s current design allowed for too much roll, which causes a rough landing.

Researchers and engineers will use the data collected from the test flight, to enable them to improve the aircraft’s design and conduct further tests on the aircraft.  KLM Royal Dutch Airlines is a contributing partner and funder of the project.