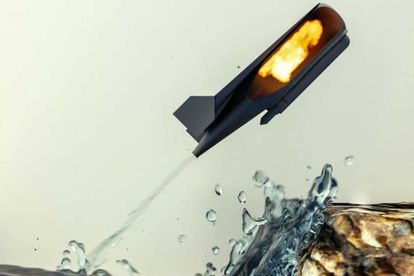 Science is always finding ways to advance in its creations. The roboticists at Imperial College London and the Swiss Federal Laboratories for Materials Science and Technology are leading the way with a new device.

They have developed a new type of glider. The device is able to jump from the sea (or water) into the air like a flying fish using a water-reactive fuel.

How the glider jumps without an engine

The aerial-aquatic glider is so small it can easily fit in the palm of your hands. What makes this piece of machinery unique is that it uses a chemical reaction to propel itself out of the water instead of an engine.

The glider works by having water pumped into a master chamber before its siphoned into another smaller one. The second chamber is filled with calcium carbide powder.

The chemical reaction from the water and powder then creates acetylene gas, which is forced into the main chamber and ignited. Scientists figured out how the ignition force would expel water in the chamber, pushing the glider into the air.

How the device operates

The only moving part in the device is the pump. Speaking to Popular Mechanics lead roboticist Mirko Kovac explained how the device works.

“It doesn’t need any pistons or valves, which are typical for combustion processes or internal combustion engines. It uses the property of the fluid, the gas, the water, and this reaction to create the various stages of the combustion.”

Because of its small size, the glider’s jump only requires 0.2 grams of calcium carbide and a small amount of water. Currently, the device contains enough calcium carbide for more than 20 jumps.

What the glider could be used for

Kovac also revealed that it could glide for almost 26 metres and “doesn’t need to carry a lot.” The roboticist added: “This size is good because it’s very portable, it’s disposable and it’s inexpensive.”

He and his team hope to scale the device up in both size and distribution. Their aim is to have the glider used by the scientific community to take salinity, pH, and collect water samples in vulnerable marine environments.

Vulnerable marine environments that could benefit include along coral reefs. Other similar robots that the team of scientists previously worked on used either tethered systems of power or are propelled by internal engines or compressed gas.

One such example is the robotic bee. The insect-sized flying device was named the RoboBee and is smaller than a quarter and 12 times lighter than a paperclip.

The robot can fly through the air using a pair of flapping wings. What makes it incredible is the ability to use electrostatic energy to cling to the underside of any flat surface.