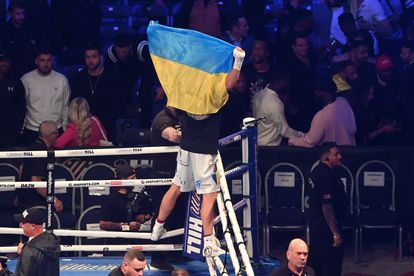 Ukraine boxer Oleksandr Usyk has signed up for the most important fight of his life putting his boxing career on hold to take up arms.

Usyk is also joined by fellow boxer Vasiliy Lomachenko in signing up to defend his homeland against Russian aggression.

Usyk to fight for Ukraine

The prize fighter insists that this isn’t something he ever wanted to do but feels it is his duty.

“If they will want to take my life, or the lives of my close ones, I will have to do it,” he said in an interview with CNN.

Usyk says he has no fear of dying defending his country and family.

“Maybe, it’ll sound sentimental,” he explained, “but my soul belongs to the Lord and my body and my honor belong to my country, to my family. So there is no fear, absolutely no fear. There’s just bafflement — how could this be in the 21st century?”

Usyk credits boxing with helping him stay calm in this crisis.

“It has helped me to be calm and mentally prepared,” he said, “And it helps me to help others who are panicking and nervous.”

Usyk would not weigh in on whether or not Russian sportspeople or teams should be barred from international competition.

He said: “Russian people don’t really know exactly what’s going on here. They’re not seeing what’s going on. They are victims of their President [Vladimir Putin].”

“I really don’t know when I’m going to be stepping back in the ring,” said Usyk.

“My country and my honor are more important to me than a championship belt.”