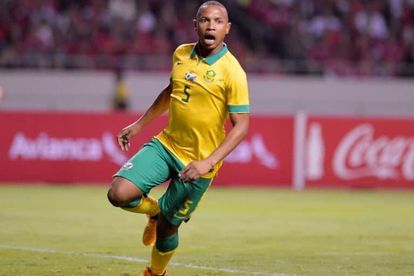 It’s a phenomenon that always seems unthinkable until it actually happens, but a player trading the black of Orlando Pirates for the gold of fierce rivals, Kaizer Chiefs is not as rare as many might think.

Bafana Bafana midfielder Andile Jali looks set to be the latest player to switch from displaying Ezimnyama Ngenkani’s famous crossbones to holding up the peace sign of Amakhosi across Soweto, as reports have suggested that he is as close as ever to a move to Naturena.

According to his agent, Mike Makaab, two clubs are still in the race for his signature, the other being league champions, Mamelodi Sundowns – as his former club is no longer a contender for his services.

The 28-year-old is set to make a decision on his future in the coming days and, as many Pirates fans would admit, a move across the Jukskei river to Pretoria may be a lot more palatable than one within the same town.

He will not be the first, as a few big names have braved a most hostile reception in the Soweto derby by making the daring move, and vice versa.

Six players who have moved between Pirates and Chiefs

This would not be the point of discussion if it wasn’t for the man who started it all, Kaizer Chiefs founder and chairman, Kaizer Motaung.

One of the greatest footballers to have come out of South Africa, he started his career at Pirates before moving abroad, where he plied his trade for Atlanta Chiefs between 1968 and 1971.

The stint in the made a big enough impression on him to return to South Africa and form his own club, which he named after the American outfit.

Kaizer Chiefs would become a great success as, in their 48 years of existence, they have managed more trophies than any other South African club, and have the largest following in the country.

During much of the 80’s Marks Maponyane was one of the most clinical strikers in the South African premier league, then known as the National Premier Soccer League, as he turned out for Kaizer Chiefs between 1981 and 1991.

A short stint in Portuguese outfit, Vitoria Setubal followed, before a season at Dynamos, which was followed by a longer, more successful stint at Pirates, where he was part of the famous African Champions League winning squad 1994.

Back in the early 1990s, Kaizer Chiefs introduced to the local football scene, a young striker by the name of Pollen Ndlanya who, after struggling to break into the first team as a 20-year-old, made a move to the PSL’s inaugural champions, Manning Rangers.

A successful stint in the now-defunct Durban club saw him become of the most promising talents in South African football, and was lured back to the Glamour Boys where his star rose before he was snapped by Turkish side Gotzepe.

Indifferent fortunes in Europe saw him make a return to South Africa in 1999, where he turned out for AmaZulu before signing for Pirates a year later, helping them to their first ever PSL title in 2001, before a rather premature end to his career the following year at the age of 32.

At the turn of the millennium, few players excited crowds quite like a youngster known as Jabu Pule, who would later change his last name to Mahlangu.

Having come through the Kaizer Chiefs youth ranks, he made his senior debut as a 19-year-old in 1999, and earned 20 national caps before moving Austrian side to SV Mattersburg in 2004.

However, his much-documented struggles with alcohol stunted his career, as he pulled numerous disappearing acts during his days at Chiefs as well as in Austria, where he was sent packing after less than a year at the club.

Supersport United offered him a second chance, but he was again kicked out by the club as attempts at rehabilitation failed.

After changing his name to honour his deceased father, Orlando Pirates took a chance at him, and his off the field antics had calmed down somewhat, but he was unable to reach his full potential before ending his career at Supersport in 2014.

Jimmy Tau broke out into the professional football scene by making an intimidating step to Orlando Pirates as an unknown 21-year-old in 2002 and was part of the side which won the 2002/3 PSL title. He would spend three years at the club, earning a regular place in the starting line-up and wearing the captain’s armband on a few occasions.

During his prime, he made the move to Kaizer Chiefs, where he had a long, successful career, where he won eight trophies in as many years, including two Nedbank Cup titles and the 2012/13 Absa Premiership winners medal on the year he hung up his boots.

Siyabonga “Bhele” Nomvethe broke into the scene back in 1997 with PSL strugglers, African Wanderers, scoring 11 league goals in his first season at the age of 20, as he attracted interest from Chiefs.

His two seasons at the Glamour Boys yielded 40 league goals in 79 appearances, and he was snapped up by Serie A outfit Udinese, where he had an unhappy stint, struggling for game time.

A move to Danish club Aalborg followed, but was interrupted by a short stint at Pirates, where he managed just four league goals in his only season there before returning to Denmark.

Not shy of crossing enemy lines, he had a happier time with the Buccaneer’s oldest Soweto rivals, Moroka Swallows, where he won the Golden Boot at the age of 34 with 20 league goals in the 2011/12 season.

Currently 40, he has made no sign of retiring as he continues to turn out for AmaZulu at his ripe old age.