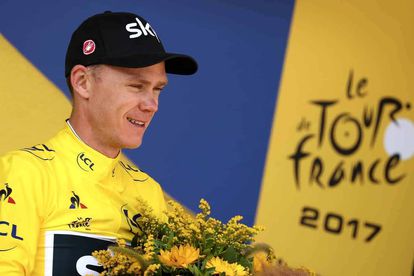 EMBRUN, FRANCE – JULY 21: Christopher Froome of Great Britain riding for Team Sky in the leader’s jersey poses for a photo on the podium following stage 19 of the 2017 Le Tour de France, a 222.5km stage from Embrun to Salon-de-Provence on July 21, 2017 in Embrun, France. (Photo by Chris Graythen/Getty Images)

EMBRUN, FRANCE – JULY 21: Christopher Froome of Great Britain riding for Team Sky in the leader’s jersey poses for a photo on the podium following stage 19 of the 2017 Le Tour de France, a 222.5km stage from Embrun to Salon-de-Provence on July 21, 2017 in Embrun, France. (Photo by Chris Graythen/Getty Images)

Chris Froome is ready to put all the nonsense behind him, as he gears up for the defence of his Tour de France title.

As reported by Business Insider, his training regime is distinctly South African.

Froome’s had a particularly tough year, as he was accused of doping following the 2017 Vuelta a España. He has since been cleared of any wrongdoing after the UCI dropped its anti-doping investigation into the Team Sky rider.

Now, the half-Kenyan and formerly South African-schooled athlete stands vindicated and hungrier than ever to prove a point to the world. But how does Chris Froome prepare for a 3 300km test of endurance?

Why, he packs his bags and comes back to Mzansi. Gauteng may not be a cyclist’s ideal destination, but Chris has got his reasons for revisiting his old stomping ground. With four titles in five years, you can’t argue with this match made in heaven.

Why does Chris Froome train in Johannesburg?

Something in the air

Johannesburg is a city high above sea level, with some areas pushing the
2000-metre mark. The thinning air means that he has to work harder for every kilometre he cycles for.

It proves to be the perfect endurance test for someone about to embark on a three-week race across the peaks and inclines of France. Froome’s routine leaves him feeling fitter and stronger than when he trains anywhere else.

He once cycled nearly 300km in one day, as he navigated his bike around the winding roads and steep traverses of Gauteng and North West. Cycling around Johannesburg – and further afield – offers him a wild variety of routes.

Staying true to his African roots has made a more versatile and adaptable rider out of Froome. Jozi isn’t your usual quiet and pristine training spot, and that’s perhaps another factor that’s given him an edge over his competitors.

In his own words, Froome claims to be a “fair-weather trainer”. He’s not one for braving the cold wintery conditions that are prevalent in Europe for months on end.

South Africa’s unique geography is also a big help for the champ. This is a very mountainous country, yet the alpine conditions don’t expose locals to prolonged bouts of cold or snow – just the way Froomey likes it.

Home is where the heart is

Of course, there’s always the sentimental factor. A Nairobi resident for 14 years, Froome completed his schooling at St John’s in Joburg. He clearly maintains a strong sense of identity with Mother Africa and enjoys being in one of its most vibrant communities.

‘Great to see Mel’s softer side’: Tweeps react to ‘RHOPTA’

D33: Dubai plans to ‘double’ economy in next decade