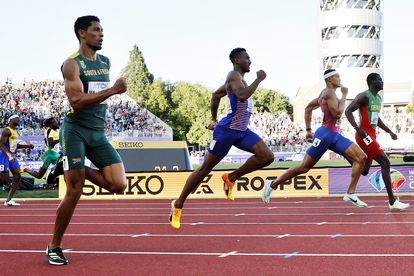 World 400m record holder Wayde van Niekerk, who set the record when winning gold at the Rio Olympics, has missed out on a medal in Oregon. Photo: EPA/Etienne Laurent

World 400m record holder Wayde van Niekerk, who set the record when winning gold at the Rio Olympics, has missed out on a medal in Oregon. Photo: EPA/Etienne Laurent

American Michael Norman made up for a disappointing fifth-placed finish at the Tokyo Olympics by winning the world 400m gold in Eugene on Friday.

Norman, who failed to advance from semi-finals in the Doha worlds in 2019 with a thigh injury, clocked a winning time of 44.29 seconds.

World record holder Wayde van Niekerk of South Africa, who set the record of 43.03 when winning gold at the Rio Olympics, finished fifth in 44.97.

Wayde van Niekerk was sidelined after a touch rugby injury

A serious knee injury saw Van Niekerk take a three-year hiatus from the sport and the result is testament to his slow, but committed comeback.

“As the world record holder, this is where I belong,” Van Niekerk said.

“This is what I need to fight for. I need to make sure that I do whatever it takes to patiently get myself back to the place where I belong and that is on the podium.

“Fifth this time around, so I am working definitely towards the goal. Hopefully next time, I am on the podium.”

Bahamian star Steven Gardiner, the reigning world and Olympic 400m champion, was a notable absentee from Eugene, missing the worlds because of an inflamed tendon.