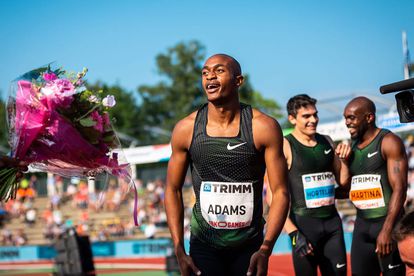 Luxolo Adams claimed the biggest scalp of his career when he beat a quality field in the men’s 200m at the Paris Diamond League meeting. Image: ECAS

Luxolo Adams claimed the biggest scalp of his career when he beat a quality field in the men’s 200m at the Paris Diamond League meeting. Image: ECAS

South African sprinter Luxolo Adams has clocked an incredible 19.82 seconds in the 200m at the Paris Diamond League.

By clocking that time, Adams could possibly find himself either as the second or third fastest South African 200m sprinter.

As it stands, Clarence Munyai’s 200m time of 19.69 is still provisionally down as the fastest South African sprinter over that distance, while his time awaits ratification. Adams who won the South African 200m national title in 2019 missed the 2020 Olympic Games in Tokyo last year due to an injury. Coincidently he also had to pull out of the recent National Athletics Championships due to an injury, and if anybody thought that would derail his confidence or make him slower, they were wrong!

Where he made his name

Adams has returned from that injury with renewed vigour, absolutely smashing his previous personal best of 20.01 secs. In the 200m. The Burgersdorp-born sprinter burst on to the scene in 2018 when he earned the bronze medal at the SA Grand Prix where he came behind fellow Eastern Cape sprinter Anaso Jobodwana as well as American sprinter Justin Gatlin. His new personal best of 19.82s will now see him usurp the Phakamisa-born Jobodwana on the list of the country’s fastest athletes over the distance.

That race seemed to launch Adam’s name not only in South Africa, but Internationally too. He went on to receive international management and endorsements, which all culminated in the 26-year-old being invited to various Diamond League meets in Europe. His Athletics career started off in Gqeberha where he was based at the Eastern Cape Academy of Sport before he made the switch to join Tuks in 2021. Making use of the increased resources in Pretoria, it looks like they have finally paid off, with his recent race result.

Watch Adams winning the race below: