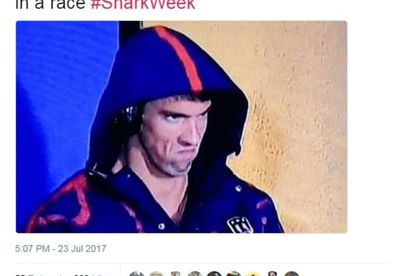 As it turns out, the US swimmer Michael Phelps was no match for a great white shark when the two of them went head-to-head in Discovery Channel’s Great Gold vs. Great White race that kicked off the network’s annual Shark Week on Sunday.

It was a close call when Phelps went on to lose with a mere two seconds when he finished the 100-meter race with a time of 36.1 seconds against the shark’s 38.1.

Phelps traveled to South Africa for the occasion.

Although a lot of people knew Phelps didn’t stand a chance against the shark, many viewers tuned in to see how they actually pulled it off.

Even though, Phelps had some additional tools (a fin) to give him a reasonable chance against the shark, viewers saw red when they figured out he was ‘racing’ a ‘digital’ shark.

Vox reported that viewers saw a montage of Phelps swimming alongside a computer-generated great white. It is believed that before the broadcast, Discovery had the Olympic medalist (who is now retired, btw) and the shark swim the course separately.

Computer-generated footage of a shark was then superimposed over the swimmer to look like they were actually racing alongside each other. Needless to say, a lot of viewers felt deprived by the whole thing.

When you find out that Michael Phelps isn't actually racing an actual shark pic.twitter.com/6KwHGaWXc9

THERE'S NOT ACTUALLY GOING TO BE A SHARK NEXT TO HIM I QUIT IT'S ALL BEEN A LIE. #sharkweek #michaelphelps

Michael Phelps not PHYSICALLY racing a shark but still having a tv special is equal to having a meeting when it coulda been an email :/

Call me crazy but I thought they were gonna put Phelps up against a real shark not a simulation. I feel robbed. #SharkWeek #PhelpsVsShark pic.twitter.com/XgdEphkl6m

The hour-long broadcast also included Phelps simulating 50-meter races against two other varieties of shark in order to prepare for the race. In the end he actually beat a reef shark with a time of 18.7 seconds.

It's not lookin' good, Phelps pic.twitter.com/SzuUhzhGiU

MICHAEL PHELPS IS FASTER THAN A REEF SHARK pic.twitter.com/4fPqYYLgBR

Although, the end was a bit anti-climactic for some, the real point of it all was to educate people about the intricacies of a shark.